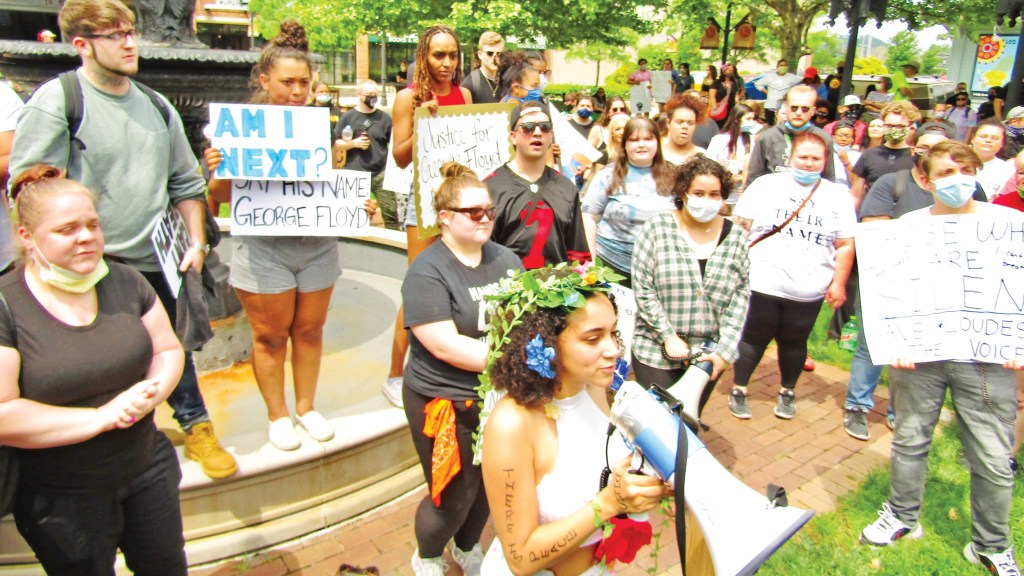 The “Walk, Stand and Speak for George Floyd” rally took place in Huntington on Saturday, beginning at Ritter Park and then moving to Pullman Square. (For The Ironton Tribune | Austin Johnson)

HUNTINGTON — Protests have taken place nationwide following the death of George Floyd and nearly 400 people gathered peacefully in Huntington on Saturday for what organizers said was a call for social justice.

“We didn’t see a lot of action here, but people were angry about the situation going on,” Chapman said of the May 25 death of the African-American man, which occurred after video showed Derek Chauvin, a white Minneapolis police officer, keeping his knee on Floyd’s neck for 8 minutes and 46 seconds, despite his cries of “I can’t breathe.”

Floyd had been handcuffed and was lying face down after officers arrested him on suspicion of passing a counterfeit $20 bill.

Chauvin was arrested on Friday and charged with third-degree murder.

Protests have taken place nationwide, followed by unrest and riots in many cities.

Chapman said that the event in Huntington remained calm.

“It went very peaceful,” she said. “We had only one incident, which we showed the mayor and he called the police for us.”

Chapman said that Huntington Mayor Steve Williams was supportive of the event.

“He showed up and came down and thanked us for what we were doing,” she said, adding that Williams provided the demonstrators with an escort as they made their way through town from Ritter Park to Pullman Square downtown.

Chapman said she and Worstell launched a Facebook page to promote the event, and it quickly came together in a few days, with support evident from Saturday’s turnout.

“We are proud of the community who came together to stand with us,” she said.

She said they plan to do additional events and she was attending a similar rally at the West Virginia state capitol building in Charleston on Tuesday.

She said their event in Huntington was “a combination of both” a response to Floyd’s death, as well as to highlight issues locally.

One person who spoke at the rally was Cameron Miller, of Ironton, who raised the case of 45-year-old Guy Thomas, who was found dead underneath an Ironton police car in 2008.

“The reason I did it was — I’m mixed race, but I’m African American and I’ve seen plenty of incidents across the world, but this was the first thing that affected my life personally,” Miller said. “Guy Thomas was struck in front of my house on Ninth Street in Ironton.”

Miller said, while he did not personally see the incident, he felt its impacts in the region.

“He was a member of the community and we wish he could still be here,” Miller said, pointing out that Thomas was a veteran.

He explained his motivation in raising the case.

“We want to see justice done and we now find out that the guy who ran him over is a police chief,” he said.

Richard Fouts was a new Ironton Police officer when, on the snowy, cold night of March 8, 2008 he returned to the department’s parking lot and found Thomas, dead, under his police cruiser. Fouts was accused of dragging Thomas 10 blocks from near the Ninth Street playground.

An autopsy that was performed by the Franklin County Coroner’s Office stated that the blood level of Thomas registered a toxic-to-lethal concentration of alcohol. No determination was made as to the cause of death or whether Thomas was alive when the police cruiser struck him. The autopsy suggested that traumatic asphyxia, a possible seizure, an elevated ethanol level and possible hypothermia contributed to the death.

Local officials said Thomas was not standing when he and the cruiser came into contact, suggesting he was lying in the roadway at the time of the incident. The findings, they say, are based on the lack of impact damage to the cruiser.

The investigation was turned over to the county prosecutor and in May 2008, a grand jury did not return an indictment against Fouts, who had resigned on April 11, 2008.

Then-Lawrence County prosecutor J.B. Collier said he believed the jury was influenced by the fact that Thomas was intoxicated at the time and that the autopsy could not determine with certainty if the man was dead or alive when the cruiser made contact with his body. Collier said a final autopsy report disputed an earlier suspicion that Thomas had died from asphyxiation.

In June 2009, Thomas’ family filed suit against the city, alleging that Fout’s police cruiser had a sheet of ice covering the windshield and that Fouts had scraped a small hole in the ice on the driver’s side. It also alleged that Fouts reported he “thought he struck either a dog, or a curb or a snow bank. Fouts did not stop his vehicle to determine what he had struck.”

On Feb. 3, 2010, a lawsuit was officially settled with the family receiving $250,000, which was paid from city insurance coffers.

Fouts is now the police chief of the Port William Police Department in Port William. The village is located in Clinton County, 23 miles east of Washington Courthouse, and has a population of 254 people.

Miller said there are a number of things about the case that do not sit right with him.

Miller said that the nation is now in “a time of accountability” and it was the “perfect time” to speak out. He said, at the time of Thomas’ death, social media was in its infancy and the connectedness of the digital world was not as strong.

He said he hopes Fouts’ village will look into the details of the case and that he does not feel the officer should be in “a position of power.”

“This needs to be talked about,” Miller said. “And for those who do not have a voice, I could be that voice.”