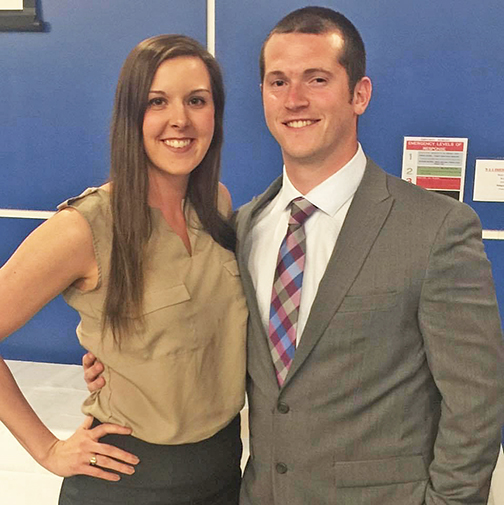 The husband and wife tandem of Rachel and Neil Harries will be coaching volleyball and soccer at St. Joseph High School. Rachel will be the head volleyball coach and Neil the assistant girls’ soccer coach. (Photo Submitted)

Sonny and Cher, Stiller and Meara, Burns and Allen. Those are some of the famous husband and wife acts.
The St. Joseph Flyers have their own version of a husband-wife duo with Neil and Rachel Harries.
The couple met at the University of Rio Grande as standout student/athletes.
Neil will help head coach Dan Blair with the Lady Flyers’ soccer team while Rachel takes over as the Lady Flyers’ head volleyball coach.
“We’ve been a lot of places, met a lot of people and learned a lot of different things,” said Rachel. “We had some good teachers and gained a lot of valuable experience along the way. But we just wanted to come home and help kids here to get better and to be with family.”
A native of England, Neil Harries was a four-year starter and Rio Grande went to the NAIA national soccer tournament all four of his seasons with the RedStorm.
Rio Grande was NAIA national runners-up his freshman season. He was named NAIA All-American honorable mention as a junior and second team All-American as a senior.
Neil was the Champion of Character Award winner his senior season.
After Rio Grande, he coached at Bates College in Maine, Mount Aloysius College in Pennsylvania, and then Hampden-Sydney College in Virginia, all NCAA Division 3 schools. He recently served as an assistant coach at the University of Dayton.
Besides his coaching, Neil played for the PDL (Professional Development League) team in Maine and coached club for GPS Portland Phoenix. He played for the PDL Michigan Bucks team, the New Orleans Jesters and West Virginia Chaos.
In professional soccer, the major league level is the MLS and then the USL and PDL. Generally, players use the PDL during the summer to stay in shape for the college season.
Rachel was a three-sport standout for Ironton High School in volleyball, basketball and track. She was a member of two relay teams in track that qualified for the state meet.
At Rio Grande, she was a four-year letterman and three-year starter in volleyball and a four-year letterman in track. She was all-conference in the league track meet her junior and senior seasons and she was a Mid-South Conference All-Academic recipient four consecutive semesters.
Rachel played volleyball for Billina Donaldson at Rio Grande and then coached under her for two years. Donaldson is not only a member of the Rio Grande Hall of Fame but accepted an invitation to try-out for the 1996 United States’ Olympic team.
Rachel was an assistant at Oak Hill before taking assistant coaching job at Newman University in Wichita, Kansas, Mount Aloysius College, and spent two seasons at Prince Edward County High School in Farmville, Virginia including one year as the head coach before deciding to return to her hometown.
She also coached club ball Shockwave Volleyball Academy out of Wichita State and U-Turn Sports Performance Academy Volleyball in Richmond, Va. Her 16-and-under team finished second in the 2017 regional tournament and was ranked in the top 10 of the Old Dominion Region.
Rachel was an assistant coach at Ironton for one season and then took a job as the Lady Flyers’ assistant last year.
In track at Rio Grande, Rachel placed in three events her junior year and four events her senior season at the MSC meet.
“You can ask any coach here (at Rio Grande) and they’ll agree Rachel is the best athlete on the campus,” Rio Grande track coach Bob Willey said of Rachel’s performance after her senior year meet.
As a junior, she was second in the discus and hammer while running the anchor leg on the 4×100 meter relay team that finished seventh after just two days of practice due to high water.
In her senior season, Rachel was third in the hammer, sixth in the discus, seventh in the high jump and ran the anchor leg on the 4×100 relay team that finished fifth.

Slots still open for Run By The River