Panthers’ PK Wilson looks to get his ‘kicks’ with Marietta 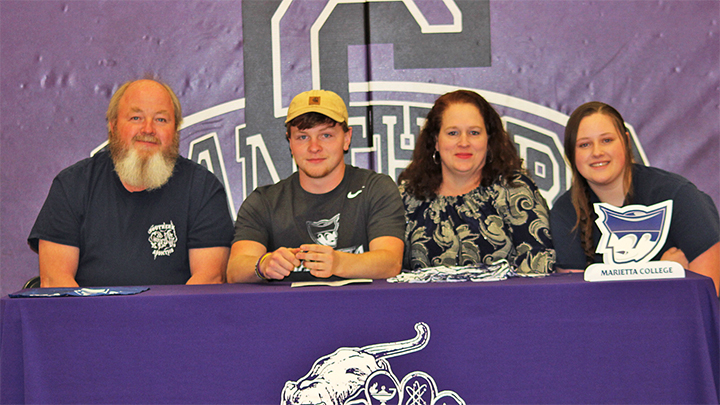 CHESAPEAKE — Brady Wilson was thinking track. The Marietta Pioneers were thinking kicker.
The Pioneers thought right.
While the Chesapeake Panthers’ senior placekicker and pole vaulter went looking for a college home in track, it was Marietta College that got Wilson thinking their way and signed him to a letter-of-intent.
“There weren’t a lot of different track schools I talked to,” said Wilson.
“The (Marietta coaches) opened their arms warmly to me. They showed me everything that was at the college and make sure it’s not all about athletics, it’s more about the academics there. It just felt right when I was there.”
An NCAA Division 3 program, Marietta was 5-5 last season and 4-5 in the Ohio Athletic Conference.
The Pioneers have three kickers but the regular placekicker did not return to school.
“I might have a chance of starting there,” said Wilson. “I plan on it. I’ve put in a lot of work in the offseason with my kicking techniques.
“I’ve done a lot of running and I lift every day. I plan to get out there and at least start.”
Wilson was 33-for-37 extra point attempts — one was blocked — but did not attempt a field goal but he made a 55-yard attempt in practice.
Wilson started kicking his freshman season. The previous kicker graduated and then-head coach Andy Clark went looking for a replacement.
“(Coach Clark) came up to me because I could kick a soccer ball pretty far and I joined the team after that,” said Wilson.
One of the biggest differences from playing soccer and then trying to kick for the football team was the number of fans in the stands.
“Chesapeake soccer we get maybe 25 people in the stands. Especially when we played Rock Hill in football and Ironton in football, there are way more people there. The pressure can get to me, but I just try to tone it out,” said Wilson.
Going to Marietta means Wilson will be teammates again with some former Chesapeake players like freshman linebacker Dillon Lunsford, sophomore offensive lineman Brevin Webb and sophomore defensive lineman Zach Wright.
“My goal is to win a championship at Marietta. We don’t lose that many people. There are a lot of good Chesapeake boys up there who play. I just feel we’ll win a championship there,” Wilson said.
In track, Wilson cleared 12-feet in the Division 2 regional meet last season and was hoping to break the school record this spring only to be derailed by the COVID-19 outbreak that canceled spring sports.
Wilson said he had cleared 12-6 in practice last season.
“Marietta College is the only one who really reached out to me. No one seemed interested. Track teams didn’t talk to me. I was upset (there was no track season). I was really upset about it. There’s a lot of chances I could have had this year,” Wilson said.
Wilson plans to major in physical therapy.

The husband and wife tandem of Rachel and Neil Harries will be coaching volleyball and soccer at St. Joseph High... read more