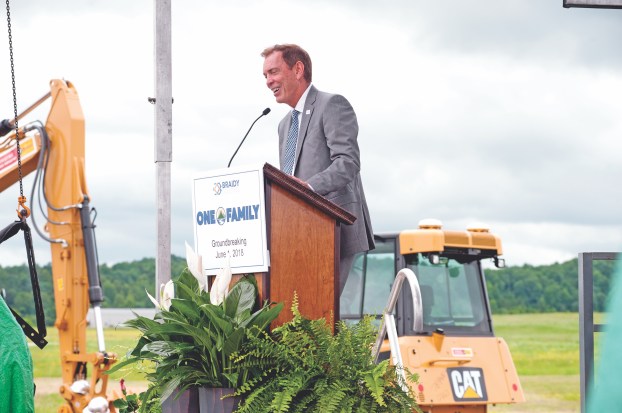 Braidy Industries founder Craig Bouchard speaking at the groundbreaking of the company’s proposed aluminum mill in Greenup, Kentucky in June 2018. On Tuesday, Bouchard said that he has settled the lawsuit against the company after it kicked him out of the company in January of this year. Details of the settlement were not released. (The Ironton Tribune | Jessica St. James)

GREENUP, Ky. — Braidy Industries’ former CEO Craig Bouchard has dropped his lawsuit against the company and is no longer involved with the company he founded.

Bouchard filed a suit on Feb. 14 in a Delaware court to exercise his rights under the company’s voting agreement to remove people from the board of the company after the board voted in January to oust him as the company CEO and president.

Braidy Industries made the announcement on Tuesday of the settlement of all litigation between the company and Bouchard.

“Both the company and Bouchard recognize the contribution each party has made to the creation of Braidy Industries and the state-of-the-art aluminum rolling mill in Eastern Kentucky,” the company said in a press release, and added the board of directors looked forward to building on the foundation Bouchard set and bringing his vision to fruition.

As part of the settlement, Bouchard stepped down from the board of directors and is no longer involved with the company in any capacity.

On Facebook, Bouchard wrote that his vision has never wavered to bring the most technologically advanced and lowest cost aluminum rolling mill in the world to Appalachia.

“With that said, it is with the best interests of the people of Northeastern Kentucky in mind that I am announcing that we have amicably resolved the pending litigation currently playing out in the Delaware Chancery Court.,” he wrote. “It has recently become clear that the viability of the company moving forward is at risk should this litigation continue. That risk is simply not worth taking.”

He wrote that he is confident that the Braidy Industries leaders are moving toward the same goal of bringing the mill to Kentucky and revitalize a region that deserves to be recognized as a leader in industry.

“The board members have in all cases done what is best for its shareholders and they are committed to making this project a reality,” Bouchard wrote. “I hope to continue my efforts and advocacy in support of the mill and Eastern Kentucky moving forward.”

The company said the settlement marks a path forward for their “promising business model by removing any litigation-focused marketplace concerns and allowing the Braidy board of directors and Ashland leadership team to accelerate plans to build the world’s most technologically advanced aluminum rolling mill at a time when global capacity is significantly constrained.”

The new mill in Eastern Kentucky is expected to create more than 1,000 constructions jobs, 550 full-time mill jobs and thousands of indirect jobs in the region.

In February, Braidy Industries’ interim CEO, Tom Modrowski, told the Kentucky Senate Appropriations and Revenue Committee, that the company needed to raise another $500 million to build the plant.

Kentucky invested $15 million into the $1.7 billion project, which has yet to begin after two years.

after its groundbreaking ceremony outside of Greenup, Kentucky.