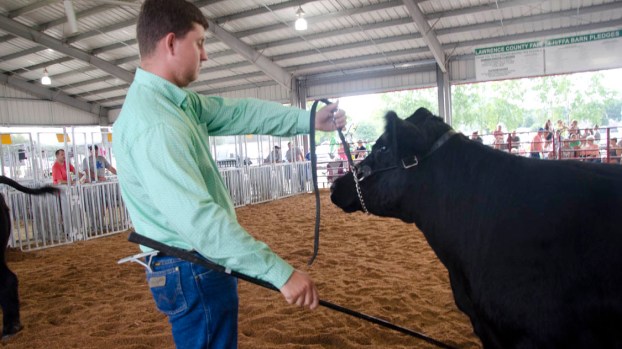 Uriah Cade shows his animal in the cattle competition at the 2019 Lawrence County Fair. The county fair board and Lawrence County 4-H are surveying families to see if interest exists to hold a junior fair after Gov. Mike DeWine eased restrictions on county fairs and made funds available to assist with costs during the COVID-19 pandemic. (The Ironton Tribune | Heath Harrison)

ROME TOWNSHIP — The Lawrence County Fair was announced as canceled last month, but the fair board said a survey is being conducted among county 4-H members to determine interest in a junior fair.

The move comes after Gov. Mike DeWine eased restrictions on such events regarding the COVID-19 pandemic.

The state also announced that counties will get $50,000 in funding from the state if they host a junior fair, with $15,000 available if they do not.

The fair board announced on May 26 that the Lawrence County Fair, which was set to run from July 11-18, was canceled.

However, the board said that without the senior fair to bring in money, the cost of the junior fair was too high and the event was canceled in its entirety.

With DeWine’s announcement, fair board vice president Chris Collier said Rachel Fraley, head of the Lawrence County 4-H Extension Office through The Ohio State University, would be contacting 4-H members to determine if there was still interest in taking part in a junior fair.

Collier said many families have already sold animals that were being raised for the event. He said the board will decide based on interest.

“It’s about the kids,” he said. “Most people have been understanding about all of this.”

Collier credited State Rep. Jason Stephens for working to have restrictions eased for junior fairs and pushing to make funding available to the fair boards.

Grandstand events would be allowed under the guidelines issued by DeWine, but seating must be limited to half capacity, with six feet of spacing between families.

For livestock shows, it is recommended that judges to wear masks, with spacing maintained between participants.

Fair boards are asked to maintain one-way traffic in the midway and buildings.

Collier said the decision to cancel was partly financial and also due to the restrictions that were in place and difficulties in implementing social distancing for such a large event, which draws large crowds.

He said a decision would likely be made on Saturday. He said if a junior fair happens, it would not include the animal sale it normally closes with.

In the wake of the cancellation announcement, an independent event, the Lawrence County Livestock Show has been organized by Rob Calaway and Carrie Cheek, two parents involved in 4-H and the fair.

Cheek said there event is on, even as the fair board works out a decision, and that they have raised the funds to put it on.

She said it would allow youth to show rabbits, chickens, lambs, hogs, goats and cattle and is set for July 14-16, with animals being brought in on Monday, July 13.

She said about 40 children have registered so far and they have arranged for vendors to sell concessions.

Organizers would lease the fair grounds. It would be a non-terminable event and the animals would not be slaughtered. Options would be available for the sale of animals.

It is later than usual, but the Lawrence County Museum has reopened for the 2020 season. Museum secretary Peggy Karshner... read more