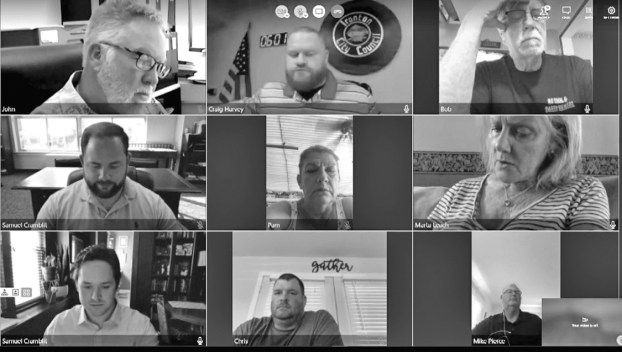 On Thursday, the Ironton City Council met via Facebook Live. Among the items on the agenda was Resolution 20-40, which condemned hate-fueled behaviors. The council hopes that the resolution will give a voice to more of the community. (Facebook screen capture)

Hopes resolution will help give voice to disenfranchised in the community

Resolution 20-40 states “the City Council of Ironton, Ohio unequivocally condemns hate-fueled behaviors.” It states “the problems of racism and unequal justice against African Americans are being highlighted currently across our nation in response to the deaths of George Floyd, Breonna Taylor, our own Guy Thomas, among many others” and that the council “will not be silent in the face of injustices and will act quickly to take corrective action to protect its citizens.”

It continues that the “council will be resolute to stand against social injustice, diligent in continued dialogue, and be proactive in aiding with legislative authority to eliminate perceptions of discrimination throughout” Ironton.

Council Chairman Craig Harvey said the resolution was brought about by people in the community and council member Jacob Hock, specifically, asking what the council was going to do to show leadership in the face of the current situation in the nation with the death of Floyd going viral and the “disgusting video” of his treatment.

He said people were asking him, as a leader, to not be “just not racist, but to condemn racism.”

Harvey said he felt the council had to make a statement on it.

He said that everyone from all walks of life and all positions need to follow the Golden Rule of doing unto others as you would have done unto you.

“I don’t think there is anything wrong with us standing up as a legislative body and doing that. We should treat everyone with dignity and respect,” Harvey said.

Hock and Harvey were the co-sponsors of the resolution.

Hock pointed out that Ironton is not immune to the problem of racism and that the Floyd video brought up dark memories of the recent past, specifically the death of Thomas.

On March 8, 2008, the body of 45-year-old Thomas was found in the parking lot of the Ironton Police Department underneath the cruiser of officer Richard Fouts.

Thomas was pronounced dead at the scene. Fouts was accused of dragging Thomas 10 blocks from near the Ninth Street playground on a snowy night on March 8, 2008.

Thomas was pronounced dead at the scene.

George Floyd died on May 25 after white Minneapolis police officer put his knee on the handcuffed man’s neck for eight minutes and 46 seconds.

A viral video of his death has led to protests against police brutality, as well as marches across the country.

“I think it is important that we acknowledge the problems of unequal justice and take a look at how it affects structures around us,” Hock said. “We need to figure out what we can do to fix these problems on a local level. Our solutions might look different than other cities’ solutions, but, it is up to us to engage in these conversations.”

He added that it was their duty to listen to the “voices of those who feel disenfranchised and vulnerable.”

Hock said he attended the march in Ironton on Monday night along with hundreds of others that went from the Ninth Street park to the parking lot of the Ironton Police Department.

He said he and Mayor Sam Cramblit heard from many in the black community who detailed issues they face every day.

“We need to step outside our own experiences to see what we can do to help,” Hock said, adding that he agreed it wasn’t enough to just condemn racism.

“We can build a better society, but we need to do our part right now,” he added.

“I don’t want to speak for anyone, but I want to thank all for at least being leaders and saying this matters to us,” Harvey said.

The Ironton City Council has been meeting on Facebook live because of the COVID-19 pandemic and social distanceing requirements.

The full meeting is available for viewing at Ironton Ohio City Council Live.

The band Cypress performing for a live stream at Blue Lava as part of the Appalachian Folk Festival. (The Ironton... read more