I recently read councilman Mike Pierce’s Facebook letter where he basically states that the new mayor and council for the city of Ironton have the city’s finances under control. He gives the new administration the credit for finishing the 2019 year in the black and says, “Remember the needed tax levy?” implying it was not needed.

Mike, the new administration was in office one month during 2019. I don’t know you and I’m sure you are a nice man and your heart is in the right place, but, obviously you don’t understand the big picture or the city’s finances yet. 2019 was never the problem.

In fact, 2020 is not the big problem. The previous council and mayor were trying to be proactive, instead of reactive in looking at the city’s finances for the next five years. If you don’t do that, you can find the city in a state of declared “fiscal emergency status,” like in 1980.

The fact is, Mike, the city is spending substantially more money than it is bringing in on an annual basis in numerous critical funds. In other words, they are spending their reserves in order to make ends meet. And Mike, that is not OK. A balanced budget means that you are not spending more than you are bringing in for a current year.

Think of it like this: A man and his wife have a monthly budget. They, as you say in your letter, follow that budget judiciously. Then the wife loses her job, but they continue their same monthly spending habits without cutting back on anything and the wife does not go back to work. They survive by taking out of their savings each month the same amount her paycheck was bringing in.

The city is doing the same thing. That is why, last fall, Chuck O’Leary and I went door to door asking citizens if they wanted to pay more income tax in order to keep the same city services in place or cut services. The overwhelming response was “Leave the fees and taxes where they are.”

Now comes the city finance director’s new and current five-year forecast. Believe me, Mike; nothing has changed regarding the city’s finances, other than they have actually gotten worse. Remember the pay increases recently that the city actually can not afford? No doubt most increases are deserved, but the long-term budget doesn’t allow for them. 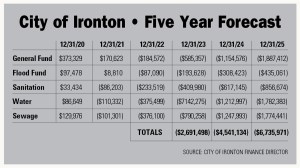 These are not my figures; they are from the city finance director. I just happen to agree with them. Remember that early in 2019, at an open public City of Ironton Council meeting, the finance director stood up and told the mayor and city council members that he was putting them on a formal one-year notice, and that either revenue had to be raised drastically or expenses had to be cut drastically in order for the city to avoid financial disaster in the next five years.

Also, those figures don’t include all of the needs of our water treatment plant, or sewage plant and our streets.

I would also point out that most citizens are not aware we have 16 existing loans that show $13 million of debt.

We operate under a “strong mayor” form of government, so a fair question to the mayor is, “What is your plan?”

I keep hearing cities may get federal government relief due to COVID-19. What do you know about that? Also, how much do we expect to get from the opioid lawsuit and how much will that be?

Nobody is saying any of this is your fault, Mayor, I want to make that clear. But I have yet to hear your plan. Or do you disagree with the finance director’s projected numbers?

On Thursday, Dr. Amy Acton, the director of the state’s Department of Health, stunned many when she announced she was... read more