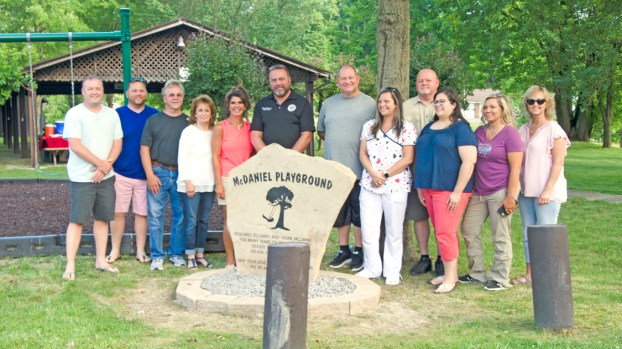 Members of the Coal Grove Village Council, the Lawrence County Commissioners and Mayor Gary Sherman pose with former Mayor Larry McDaniel and his wife, Vickie, at the dedication of the new McDaniel Playground at Paul Porter Park on Wednesday. (The Ironton Tribune | Heath Harrison) 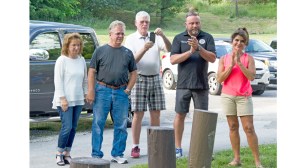 Site is dedicated to former Coal Grove mayor and wife

COAL GROVE — The village of Coal Grove reopened Paul Porter Park on Wednesday, dedicating a new playground for two of its best-loved residents.

Members of the village council and the Lawrence County Commission joined Mayor Gary Sherman for the unveiling of McDaniel Playground, named for the previous mayor of the village, Larry McDaniel, and his wife, Vickie McDaniel, of the Coal Grove Betterment Club.
Council members Jay Sherman described the marker inscribed with their names as “a rock for our rock,” citing the couple’s decades of service to the village.

He said the origins of the new playground came in 2018, when the council voted to apply for grants for the park from the state and was awarded $76,000, for which the village would be reimbursed $57,148.

Coal Grove then had to raise $19,000 and, as the grantwriter, Deidre Waller Travis, was finishing the paperwork the state asked for a copy of the deed to the park, which could not be located.

Sherman said the village thought they owned the park, but found out this was not the case. They then turned to the county commission to see what could be done before they lost the funds from the grant.

“Our commissioners were not going to let Coal Grove lose the grant,” he said. “The pulled out a miracle and gave the whole park property to the village, with the deed that we sent to the state to seal the deal.”

Then, in early 2019, the village received a visit from Greg Hennekhe, of their insurance company risk assessment division.

Hennekhe found that 90 percent of the playground did not meet Ohio Revised Code and recommended it be torn down.

“Coal Grove did not want dangerous equipment,” Sherman said. “So we closed the park and tore the equipment out.”

The village then picked American Parks, a playground company to do site visits and work with them. In June 2019, ground was broken and the playground was finished in eight days, but remaining repairs to the park took until May 2020.

Funds for the needed $19,000 were raised by the Coal Grove Betterment Club, along with donations from Giovanni’s of Coal Grove, Sam and Carolyn Hall, the Galloway family at Pickett Concrete, Gary Leach at State Farm Insurance and an anonymous donor, whose contribution Sherman said was sizeable.

Lawrence County Commission President DeAnna Holliday said she has spent her “entire adult life in Coal Grove” and was on hand for the dedication.

“We are so glad you were able to obtain the grant money and the community came together for this project,” she said.

Commissioner Freddie Hayes Jr., whose family operates the Freezette in Coal Grove, said the commission was happy to be a part of the project.

“I’d like to see every village in Lawrence County have a playground like this,” he said. “A lot of them don’t and we’re going to try to help them.”

Mayor Sherman said, due the COVID-19 pandemic, the park’s hours are from 10 a.m.-8 p.m. each day and that the playground will be sanitized nightly.
McDaniel, for whom the park is named, retired as mayor last year.

Paul Porter Park is the site of the annual Family Fun Days celebration in July, which has been postponed this year. Village leaders announced that event, as well as the fireworks display for Independence Day, have been postponed.

Hopes resolution will help give voice to disenfranchised in the community On Thursday, the Ironton City Council passed a resolution... read more