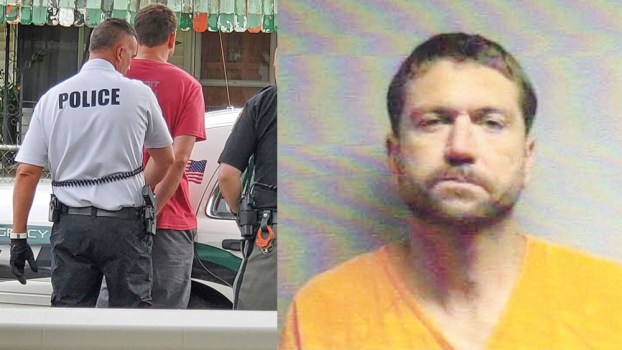 Richard Vannucci, 44, of Proctorville, was charged with felonious assault and domestic violence on Wednesday after police said he stabbed his girlfriend in the face with a kitchen knife. (LEFT: Proctorville Police Department photo | RIGHT: Lawrence County Jail photo)

PROCTORVILLE — A Proctorville man was arrested Wednesday after police said he stabbed his girlfriend in the face with a kitchen knife.

According to police chief Bill Murphy, officers arrived on the scene at 420 Front St. at about 6:15 p.m. and were met outside by the girlfriend, who told them that Richard Vannucci, 44, had come up to her and taken a kitchen knife from her and stabbed her face and fled.

The victim was transported to St. Mary’s Medical Center for her injury, a deep cut to her cheek, for which she received stitches.

Vannucci was located by officers on the other side of Proctorville, charged with felonious assault and domestic violence and taken to the Lawrence County Jail.

According to the police report, officers suspected Vannucci was under the influence of alcohol at the time of the incident.

A post on the department’s Facebook page stated Vannucci has been arrested and charged with domestic violence three times by officers in the last three months.

According to those working for the National Domestic Violence Hotline, incidents of domestic violence have been on the rise during the COVID-19 pandemic, as families are sequestered in their homes.

In a report by WBUR, those working at the hotline said they have seen a 12 percent increase in calls to the hotline and expect a spike to come, while a study by University of California in Los Angeles found increases in both Los Angeles and Indianapolis when under shutdown orders.

COLUMBUS — All shootings by Ohio police officers and any deaths of individuals in custody would be investigated by independent... read more