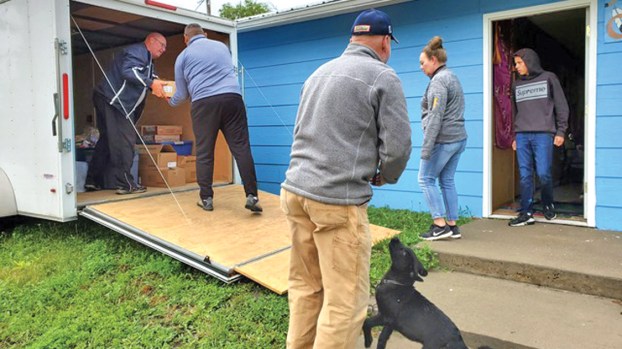 Dan Harmon, a teacher at Dawson-Bryant High School, received word from Steve and Teana Guerue of White Horse Ministry on the Rosebud Indian Reservation that there were some local schools and churches on another nearby reservation in need of donations. Harmon then teamed up with Kim Graves and Chris Cecil at Pickaway-Ross, who provided the trailer to house and transport the donations. Donations included non-perishable food items for the church and a number of brand new baseball uniforms, basketball shoes and cheerleading outfits for children in the Rose Bud schools to replace the old ones.

Pine Ridge Indian Reservation, the location of the Wounded Knee Massacre in 1890, and more recently the Wounded Knee Occupation in 1973 and Pine Ridge Shootout in 1975, is the poorest reservation in the United States, despite being the eighth largest.

Rosebud, a neighboring reservation and childhood home of Bob Barker, former host of The Price is Right, faces similar economic, education and health issues. In 2015, the only emergency room in the area closed due to failure to maintain standards. With no ER services, nine people died during transport to the nearest health facilities, located about 50 miles away. After seven months, the ER was opened again.

Harmon, who is part Cherokee himself and spent some years living and teaching career-based intervention on the Cherokee Indian Reservation in North Carolina, wants to see the reservations thrive. When asked how he got involved he said, “A few years ago, God told me to go to the reservations and help the people there. So that’s what I do.”

COLUMBUS (AP) — Every registered voter in Ohio will receive an absentee ballot request form in the mail through the... read more