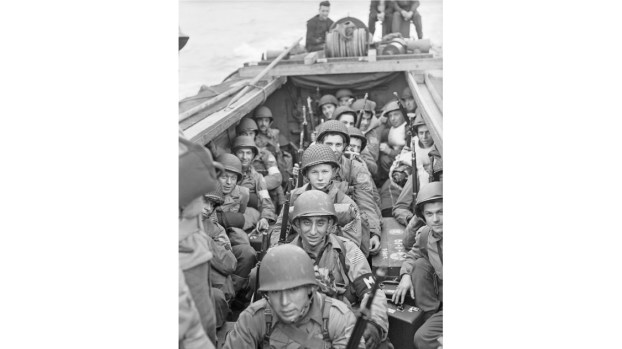 American troops ride on board a landing craft, headed for the beaches in Algeria during World War II’s Operation ‘Torch’, in November 1942. (Public domain)

Editorial: Help to honor a generation of heroes

The following day, known as Victory over Japan Day, marked the end of World War II, with Nazi Germany having surrendered months earlier.

The conflict had raged for six years, resulting in nearly 75 million deaths and involving most nations on earth.

The crimes of the Axis nations included the Holocaust, the systematic murder of six millions Jews, and are regarded as one of the darkest episodes in human history.

Drawn into the conflict in 1941, the United States sent more than 16 million soldiers to fight against the Axis, with 405,399 making the ultimate sacrifice and not returning home.

About 10 million of those serving during World War II from the U.S. were drafted.

They came from all walks of life, including Lawrence County, where many young men left their family farms to serve in Europe and the Pacific.

This August, the world will mark 75 years since World War II ended. Normally, such a milestone anniversary would involve public events, with the veterans still with us, now in their 90s and above, as gusts of honor.

But, due to the COVID-19 pandemic, it is unlikely and highly inadvisable to do such ceremonies.

Here at The Ironton Tribune, we wanted to do something unique to pay tribute to these heroes.

That’s why we are putting together a special section, “World War II: 75 Years After Victory,” which will run in coming weeks.

We will feature profiles of several veterans still active in our community and we want to include as many of those who served from the Tri-State as possible.

On page 5A of this weekend’s paper, (as well as on our Facebook page) you will find a submission form, in which we are asking for information on living World War II veterans from our region, as well as names of those who are no longer with us. We will also be including a list of those from Lawrence County who died in the conflict.

If you have a veteran in your family or community you would like to include, please send their information.

Our aim is to make this a fitting tribute for all who served and we ask all of readers to please spread the word on this project.

Letter to the editor: Remembering my father—a proud black man

Sunday, June 21, will be Father’s Day and many sons, daughters, wives, mothers and even sisters and brothers will send... read more