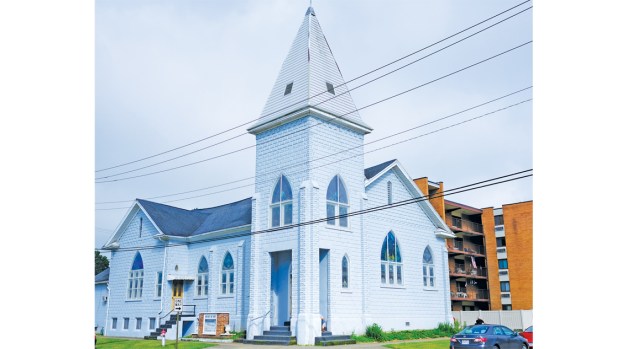 Quinn Chapel AME Church is located on S. Eighth St. in Ironton. Churches in the region are adapting to coronavirus restrictions as they have reopened in past weeks. (The Ironton Tribune | Jeremy Holtzapfel)

Many churches in Lawrence County resumed services in the past few weeks, while others have remained closed amidst the COVID-19 pandemic.

“We already had an online presence with a modified service, but we fully adapted our entire worship services to be online,” Thomas said.

Now that restrictions have started to lift, New Hope UMC returned to its first in person service on June 7, and Chesapeake UMC returned last Sunday.

“We are continuing our full online presence,” Thomas said. “What leadership said is that, if numbers of cases rise in the county or we have a spike, that we will return to online worship only.”

For in-person services, Thomas said they have been diligent about cleaning and sanitizing the church. Additionally, those who attend are asked to sit six feet apart from those not in their household and wear a mask, unless they have medical issues that prevent them from wearing one.

At this time, the church is not singing, Thomas said. During their worship services, they instead hum and tap their feet to the music.

Thomas said the service is a hybrid service, featuring in-person preaching and prayer, and virtual readings of scripture played for the congregation.

Thomas said he has seen an increased participation because of this, with many people more comfortable recording at home then speaking in front of a crowd.

The church’s outreach programs, like Maxine’s Closet and the Rome Ministerial Food Pantry, have resumed or continued operations with social distancing measures in place, as well. Thomas said that the food pantry saw a spike during COVID-19, but not as big of one as they expected.

Additionally, Thomas said they have seen an increase in viewership of their online services, garnering nearly 1,000 views, with viewers as far away as Pakistan.

“COVID-19, while it may have taken us out of the building, it has shown us what a church really is, and who the church is, and that it’s actually larger than what we might experience on a Sunday morning,” Thomas said. 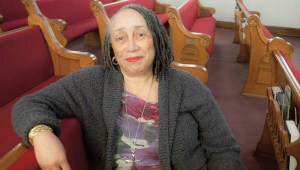 The Rev. Margaret Tyson is the pastor at Quinn Chapel AME Church in Ironton (The Ironton Tribune | Jessica St. James)

The Rev. Margaret Tyson, the pastor at Quinn Chapel African Methodist Episcopal Church in Ironton, has had a similar experience with increased viewership of online services, having gotten almost 500 views from this past Sunday’s live streamed service. Her Sunday services usually had around 20 people in person before the pandemic.

Tyson began live streaming church services on Facebook not long before the pandemic started for a church member who was unable to attend due to a hip replacement surgery.

Quinn Chapel’s services will remain online at least for the next month, Tyson said. Most of her congregation is in the population at a higher risk for COVID-19.

Tyson’s services are done in the church with only her and one other person assisting. Tyson does a full worship service, including hymns and a sermon, over Facebook live, which is available for people to watch again later.

“I always say that, if they miss something, they can listen to this sermon again,” Tyson said. “They are really liking this electronic age.”

Despite not meeting in person, Tyson’s church has not been disconnected from the community. During her services, people watching can comment and say things like they would during an in-person service, which she will see in real time during the service.

“This year we had an Easter basket drive-by,” Tyson said. “There were four of us, we had our gloves and our masks and everything was sanitized and we filled up baskets. We gave out over 60 baskets just having them drive up. Either the kid could come out or we took it to the car, and that was really exciting because we were able to still minister to the community.”

Tyson has also provided her members an opportunity to take communion.

“People can just text to me how many they need, I put the sealed communion cups with a wafer, I put them in baggies by family,” Tyson said. “They drive by and I hand them out the window of my car, with my gloves and mask, and they pick them up.”

Tyson said she is very excited about the viewership the services have received with their live stream, and is excited to have a new way to spread the word of the Lord.

“I’ve got a much wider viewership, the word is going out,” Tyson said. “In our little church, with a small congregation, is now reaching out all over the country, and people are listening to the word and they’re sharing the service.” 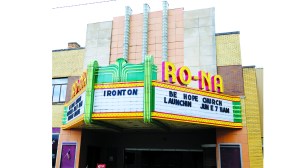 Be Hope Church recently launched in the Ro-Na Theater in Ironton.

For Robby Brown, the pastor of the Ironton Branch of Be Hope Church, the pandemic presented new and unique challenges. He was set to open the new branch of the church in March, but was delayed until June 7.

Brown said that while they were unable to open during the pandemic, their worship band got extra time to practice and they were all better prepared for guests afterwards. 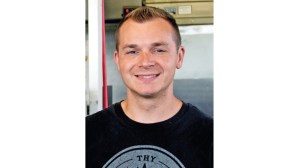 Robbie Brown is pastor at Be Hope Church in Ironton. (The Ironton Tribune | Mark Shaffer)

The church has been encouraging social distancing at services, and discouraging contact during greetings. Church volunteers are encouraged to wear masks while volunteering.

Be Hope Church meets at the Ro-Na theater in Ironton, which Brown said he initially worried would be way too large for the church, but has turned out to be great for social distancing.

Brown said he has struggled with inviting just enough people to open a church during the pandemic.

“When you’re starting a new church, you, always want to try to launch big, and make a big deal out of inviting as many people as you can,” Brown said. “You just really want to have a strong start. This was kind of interesting, because it’s like we’re kind of caught in this tension of all trying to push to launch as big as we can, but at the same time, we can’t do that to the full extent because we have to be safe with what we’re doing, too.”

Brown encourages his congregation to save hugs for later, and greet people with a wave.