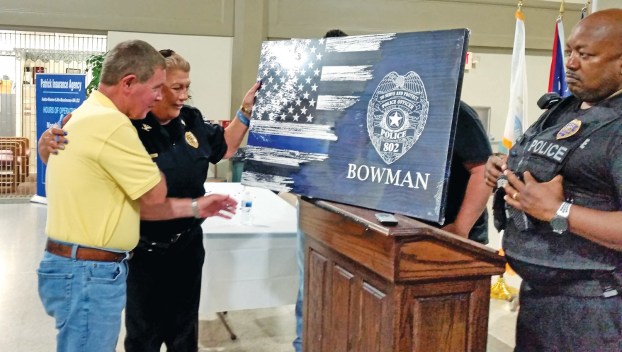 Now retired Ironton Police Department Capt. Chris Bowman checks out a painting with his badge number and name presented to him by Chief Pam Wagner during his retirement party on Friday as IPD Sgt. Anthony Forest and others look on.

Bowman retires after being with IPD, sheriff’s office

After four decades in law enforcement, Chris Bowman is bowing out.

45 years ago, he started at the Lawrence County Sheriff’s Office and served at police departments in Proctorville, Chesapeake and Coal Grove before coming to Ironton.

He joined the IPD in October 1987 and became a member of the Lawrence County Drug Task Force in 2012.

As for why Bowman joined law enforcement, he can’t remember.

“It was a job,” he said. “And thankfully, the city has provided me with a job to raise my family with.”

As for why he stayed on the job so long and what he will miss about the job, he had one answer — the people, both his fellow officers and the community that he served.

He said it is tougher now to be a police officer than it was back in the 70s and 80s.

“You had a whole lot more respect back then,” he said. “People respected you, you felt like you were needed, really. It is a whole lot different now, but things have a way of turning around.”

Among his achievements, Bowman has gotten commendations over the year including solving 46 theft offenses in 1988, from the U.S. Air Force in 1992 for apprehending a murder suspect, for helping a woman who was stabbed in 1996 and in 1998 for a breaking and entering crime.

In 2000, he successfully negotiated the release of a clerk at a convenience store who had been taken hostage, in 2007, he and other officers got commendations for successfully disarming a suspect during a domestic situation who had a knife.

“Capt. Bowman’s work has no doubt saved countless lives with his work to take illicit drugs off the streets, apprehend assault and domestic violence suspects and untold other duties with our city,” said Ironton Mayor Sam Cramblit. “Thank you, Capt. Bowman, for all your great years.”

IPD Chief Pam Wagner said records show that Bowman was with the department for 32 years, eight months and three days.

“To say that is monumental, it is,” she said. “For any of you young officers coming up, it is a long time in law enforcement, with 40 years and counting.”

Wagner and Bowman have worked together for a long time. First at the sheriff’s office in the 70s and then three decades at the IPD.

She said the loss of Bowman means a lot to the department.

“That kind of experience, it is hard to replace. It is invaluable,” Wagner said. “There’s no way to measure the number of lives he has saved by working on the drug task force. That’s a lot of experience walking out the door on us.”

On personal note, Wagner said she will miss seeing him every day.

“But we understand that Chris has to do what is best for him and his family,” she said.

Bowman already has a new job, he is now a bailiff with the Ohio Fourth District Court of Appeals for Judge Jason Smith.

“I had a whole weekend off,” he said, with a laugh.

Cause of death is unknown at this time Staff report A death at the Lawrence County Jail is under investigation.... read more