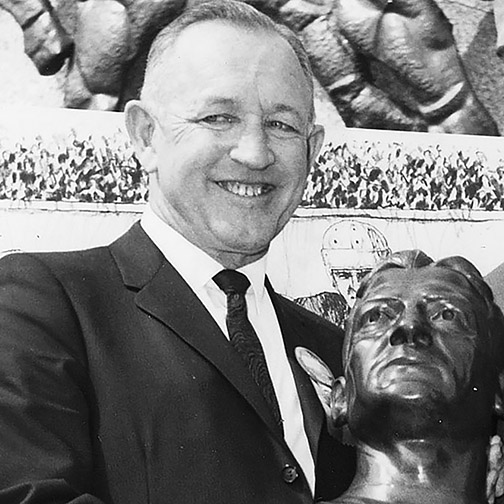 Ironton’s Dick Gallagher holds the bust of fellow Irontonian George McAfee during the 1966 Pro Football Hall of Fame induction ceremonies. Gallagher was the presenter for McAfee whom he coached at Ironton High School. 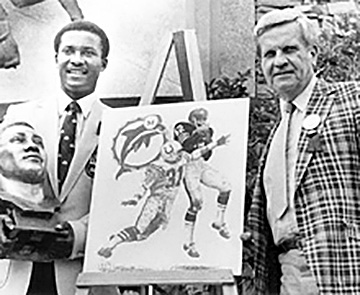 Gene Slaughter was a member of the 1942 Ironton football team. After earning four varsity letters in football at Capital, Gene got into coaching and had stints at South Point, Jackson and Warren Harding. He was named Ohio’s High School Coach of the Year by the A.P. in 1957. Slaughter coached Paul Warfield at Warren Harding and followed him to Ohio State as an assistant coach. He then took the job as head coach at Capital University and was later named the athletic director as well. After a long career at Capital, the athletic field was named in his honor and he was named a consultant to the university’s president. He was also the second Ironton native to be honored as a presenter at the Pro Football Hall of Fame when he was asked by Warfield to be his presenter in 1983. Ironton native Dick Gallagher was the presenter for George McAfee in 1966.

K of C 1405 to conduct benefit golf outing The Knights of Columbus No. 1405 Watterson Council will conduct its... read more