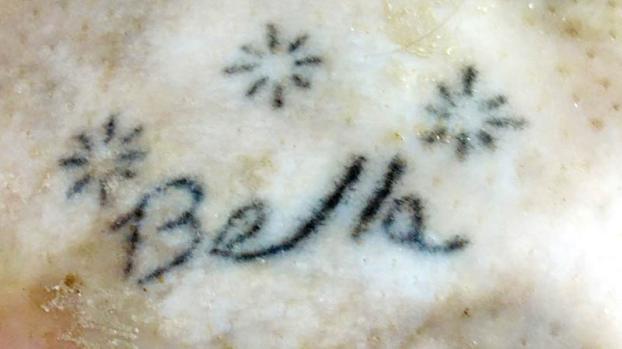 CATLETTSBURG, Ky. — The body of an unidentified man was found in the Ohio River near Catlettsburg, Kentucky on Thursday morning and the Boyd County Coroner is seeking the public’s help in identifying the man.

The deceased man was described as being approximately 5’10–6′ tall, weighing 175–200 pounds, had a short brown beard and a buzz cut hairstyle and appears to be in his 30s.

Boyd County Coroner Mark Hammond said there was no identification but the man had a distinct tattoo on his upper left arm, just above the elbow, that says “Bella” with three blue suns around it.

“That is the only tattoo he has,” he said. “There is nothing else. There was no ID on him, nothing. So, we are trying to find someone who is missing somebody or that may know that tattoo.”

Hammond said he expects that the man came from up the river, but he doesn’t know for sure.

“The body was first spotted in Catlettsburg where the river kind of comes together, around 6:45 a.m.,” he said. “He was retrieved close to the Ashland city limits, a little before 8 a.m.”

Anyone with information can contact Hammond at 606-923-8309 or mark.hammond@bccoroner.com.

If there’s one thing we’ve all learned as a result of the COVID-19 pandemic it’s that the plans we make... read more