Lady Flyers down Minford in SOC, 8-3 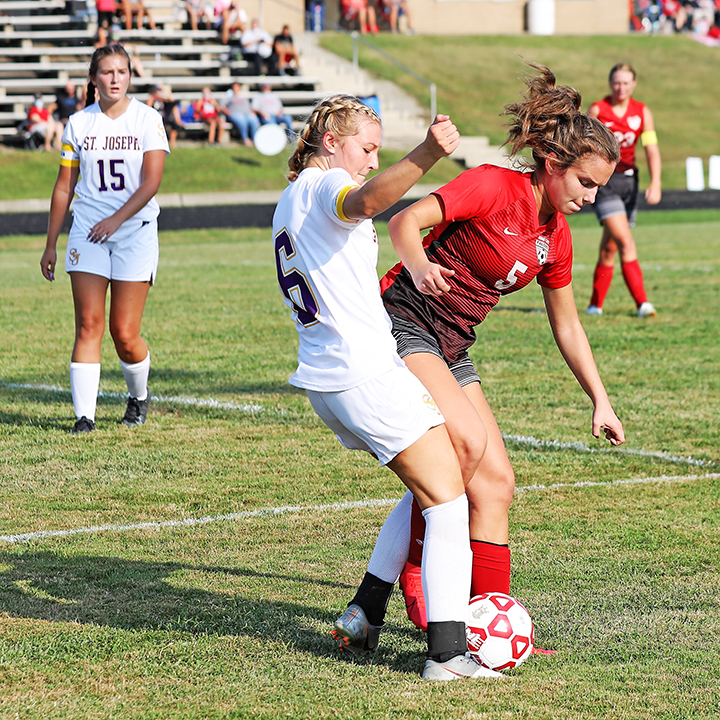 MINFORD — It was a game inside a game.
The St. Joseph Lady Flyers battle the Minford Lady Falcons in a Southern Ohio Conference soccer game that pitted St. Joseph’s Emma Whaley against Minford’s Haley Knore.
Whaley lit up the scoreboard as she recorded a “haul” or four goals while Knore got a “hat-trick” or three goals in the Lady Flyers 8-3 win on Monday.
Six of those seven goals were scored in the first half before the defenses took over after the break.
“This team is really working well together and getting themselves in position,” said Lady Flyers’ veteran head coach Dan Blair.
“With the help of assistant coach Neil Harries, these girls have really picked it up. He’s the younger set of legs that can help show the girls the things they need to do. He has really been a blessing to this team.”
Minford jumped in front two minutes into the game on a goal by Knore, but St. Joseph quickly answered as Aubrey Sutton got an unassisted goal from the 20-yard line.
Two minutes later, the Lady Flyers’ scoring machine Emma Whaley got the first of her four goals as she found the net unassisted and it was 2-1 at the 27:10 mark.
Emma Whaley got an assist from cousin Bella Whaley as she scored with 20:53 on the clock and then the two teamed up against at the 9:44 mark and it was 4-1.
Emma Whaley then scored with an assist from Laiken Unger with 9:04 on the clock.
Knore completed the hat-trick with goals at the 4:54 and 3:21 marks and it was 5-3.
After the teams made their adjustments at the half, the game turned into a defensive battle.
Bella Whaley scored her second goal off a corner kick from Unger as the lead went to 6-3 early in the second half.
Emma Whaley scored her fourth goal unassisted at the 6:45 mark and Lydia Sheridan capped the scoring off a deflected ball by the Minford goalkeeper.
St. Joseph is now 4-2 overall and 3-2 in the SOC. The Lady Flyers visit Greenup County, Ky., at 10 a.m.