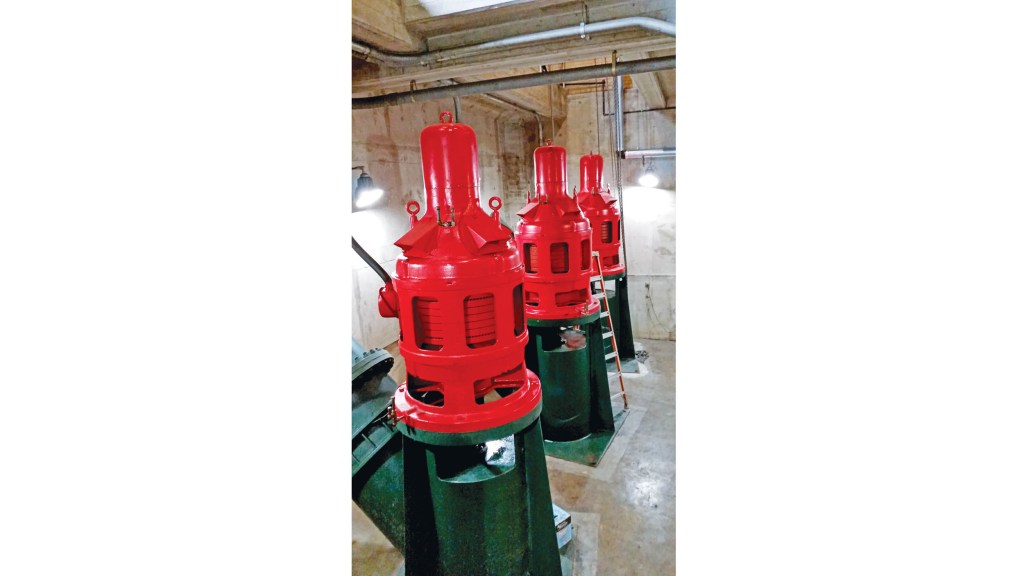 After 80 some years of service, the switch gears at Ironton’s Vesuvius flood control pump station have been replaced.

The switch gears run as many of the four pumps at the station to keep the water from flooding into Ironton’s residential and business areas.

And the technology has changed so much that Flood Control superintendent Mike Pemberton described as going from “whiskey jug to radar.”

He wasn’t being dramatic, either.

The flow control valve from 1940 was connected to a long metal line and a crock that looked a lot like a whiskey jug floated at the bottom of the well. As the water level rose, the crock would float up and the level could be read on a gauge. Now, the same thing is done by a small radar device that sends a digital signal to a computerized wheel that can be seen on a computer screen.

The control station had to be replaced because it caught on fire a three years ago, and getting new or replacement parts for the 80-year-old system proved to be tough.

“We made attempts to just repair what had burned but there was no mixing and matching of parts, a new switch gear wouldn’t fit,” Pemberton said. “We had to replace the whole thing.”

So, the city filed a claim with the insurance company and it was approved to get a new system, which cost around $200,000.

The new switch gears have processes in place to prevent pump motors from burning. The old ones may or may not shut the motors down before that happened.

“We rarely ever had problems with the motors, we always had trouble with the switch gears that fed the motors,” Pemberton said.

The City of Ironton has a monthly $5 flood control fee and Pemberton said that the money will be used for other upgrades on the eight-decade-old system.

“For example, our pumps. They are the same age as the switch control, 1940 models. Internally, they have had nothing done to them, other than us greasing them and doing maintenance on them,” he said. “That’s why they look like they are in pristine condition. But you’re only seeing the outside.”

He said when they were replacing a coupling on the number one pump at the Vesuvius station, he could see inside the pump itself and all the flukes and steering vanes had “rotted away,” which decreases the efficiency of the pump.

“So that $5 fee we’ve got will give us a little extra money to go forth on upgrades for pumps, for switch gears or upgrades on the whole system that have been needed for the last 30-40 years,” Pemberton said.

Another upgrade they want to do is replace the switch gears at pump station six.

“We’re having trouble with it today,” Pemberton said. “Lot of times, the old switch gear and old float mechanism won’t bring the pump online automatically like it supposed to.”

So what happens during flood season is that when the river is overflowing its banks, a city worker has to sit at the station 24 hours a day and flip the switch for the pumps for however long it is necessary.

“That means overtime for a worker. And it’s just not feasible to have someone sit there for all that time,” Pemberton said. “But we have to have someone do it in order to keep the town from flooding. It’s about lives and property.”