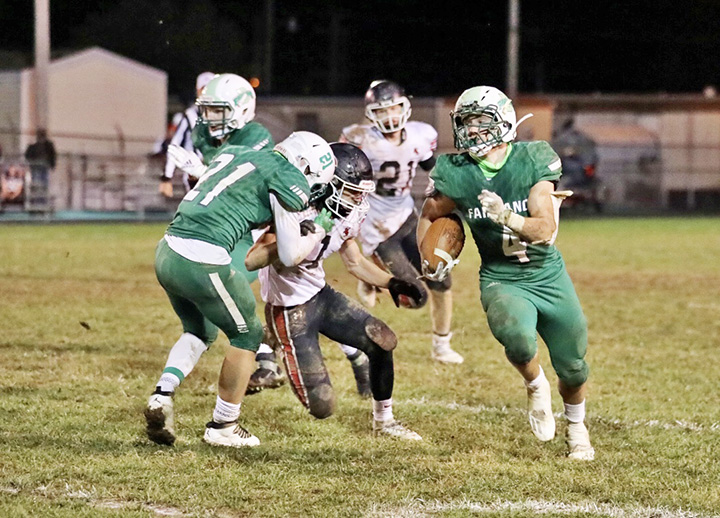 PROCTORVILLE — The Fairland Dragons swatted the visiting Coal Grove Hornets Saturday night in the semifinals of the Division VI, Region 23 playoffs, 27-12.
Fairland used unsung heroes in their victory as the little plays made big ones. For example, Tevin Taylor laid a big block on a Coal Grove defender around the left side of the field that paved the way to the end zone for wildcat quarterback Zander Schmidt.
Taylor won’t receive any stats for that block, but don’t think Fairland coach Melvin Cunningham didn’t take notice.
“If you take Tevin Taylor off this football team, we aren’t very good. He is so unselfish and at times takes a back seat to Gavin and J.D., but in today’s society full of entitlement, Tevin will sacrifice for the win and do the small things that our team needs to do,” Cunningham said after the game.
That block that led to a touchdown by Schmidt came in the third quarter to give Fairland a 13-6 lead.
The first half was slow as both teams played great defensively, keeping the score board turned off in the first quarter as neither team put points up.
Austin Stapleton, Coal Grove’s senior fullback, ran in the first touchdown of the game from 16 yards out to take their only lead of the game, 6-0.
Stapleton finished his high school career with a great performance as he carried the ball 27 times for 108 yards and 2 touchdowns.
The Dragons wouldn’t take long to answer as Hunt came in motion and ran an ‘out n up’ route and Max Ward aired it out to the back of the end zone for a touchdown.
Emma Marshall would kick the point after kick true to give the Dragons the lead at half, 7-6.
Fairland, known for their second half struggles, had a pep talk before the game at the team breakfast and the subject of that talk was finish.
Coach Cunningham invited Bob Pruett, former Marshall football coach (1996-2008), who coached Cunningham in his playing days at MU as a defensive back.
“We had the privilege of having coach Bob Pruett speak with us at chapel and he talked to us about giving up a 27-0 lead in the first game against Coal Grove.
“So, his message was about finishing and the 5 components. But, the most important one was believing in one another and there was no doubt we weren’t going to finish tonight,” said Cunningham on the advice from Pruett.
“We had a different kind of focus about us.”
After the sweep play by Scmidt in the third quarter for a touchdown, Fairland would strike again to start the fourth.
Max Ward threw his second touchdown of the night to Steeler Leep when he rolled out left and found the open receiver in the back corner of the end zone to extend the lead 20-6 with eight minutes remaining.
Coal Grove would get their second touchdown from Stapleton with five minutes to go in the game and would attempt a 2-point conversion that was stopped short.
Fairland then recovered Coal Grove’s onside kick attempt and Brumfield did the rest.
Brumfield gave an excellent performance as he carried the ball 17 times for 144 yards and one touchdown on the night, but also caught five passes for 94 yards, an average of over 10 yards a touch for the junior running back.
Cunningham even challenged college coaches to find a better football player in the area than Brumfield.
“He may not be 6’4 or run a 4.4 40-yard dash, but what college coaches should be looking at is the production on the field, and not only did J.D. have over 100 yards rushing and 100 yards receiving, but he had about 18 tackles as well.”
Brumfield dove in for a 4 yard touchdown with three minutes remaining to put the Hornets away 27-12.
The no. 3 seed Fairland Dragons will travel to No. 1 seed Fort Frye next Saturday at 7 p.m. in the regional finals and a chance to advance to the state semis.
Coal Grove 0 6 0 6 = 12
Fairland 0 7 6 14 = 27
2nd Quarter
CG — Austin Stapleton 16 run (kick failed) 8:12
Fa — Gavin Hunt 23 pass from Max Ward (Emma Marshall kick) 5:41
3rd Quarter
Fa — Zander Scmidt 27 run (kick failed) 3:08
4th Quarter
Fa — Steeler Leep 5 pass from Max Ward (Emma Marshall kick) 7:59
CG — Austin Stapleton 5 run (run failed) 4:52
Fa — J.D. Brumfield 4 run (Emma Marshall kick) 3:06