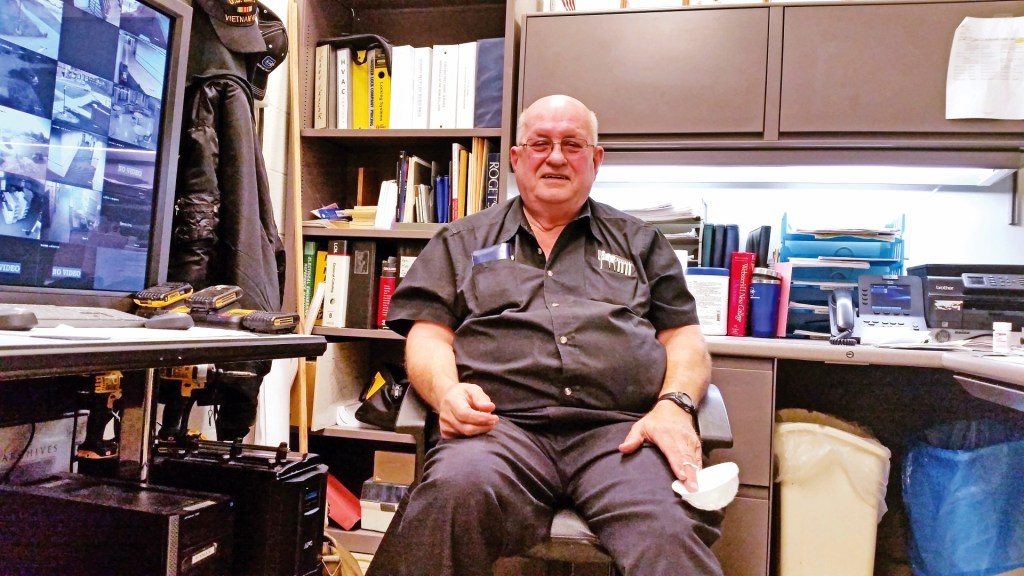 Gary Payne, seen at his office at Ohio University Southern, served in the Vietnam as part of the U.S. Army’s 25th Infantry Division. After the war, he held a number of jobs and ran his own construction company before working at OUS where he is now the assistant director of maintenance. (The Ironton Tribune | Mark Shaffer)

Gary Payne, the assistant director of maintenance and operations at Ohio University Southern, served in U.S. Army in Vietnam.

He was born in Ironton, but moved to South Point and graduated from South Point High School in 1965.

In 1967, the then 20-year-old Payne was rebuilding a boiler at a house his uncle owned when he found out that he had been drafted.

“I got that boil running and my uncle pulled in. I told him we got hot water and he says ‘Yeah, you’re in hot water’ and gave me my draft notice,” Payne said.

He was sent to Fort Knox for basic training and was then sent to Fort Pogue in northern Louisiana for advanced training.

Although Louisiana is well-known for its heat and humidity, Payne and his unit had the unusual experience of snow while they were out for a week in the woods for a training exercise. Unfortunately, their winter gear was back at the base and all they had was their fatigues and a sleeping blanket.

“We were in a night position and we were in a foxhole. We had a cover over it because it was raining. Then it turned cold” Payne explained. “I got up in the morning and it was just white. I thought ‘Man, the moon is bright tonight.’ Turns out it was six inches of snow. It was the first time it had snowed in that part of Louisiana in six years.”

The squad was supposed to show some members of Congress how they did a firing exercise, but it was canceled because the “congressmen couldn’t get into the base and we were so freezing, we couldn’t hit the side of a barn with a howitzer.”

After that, he was sent to Vietnam with the 25th Infantry Division. He was originally assigned to a heavy weapons division as a forward observer, but was transferred because, during a training exercise at Fort Pogue, he lost 40 percent of his hearing in one ear after someone fired a rifle too close to his head.

After two months, he was called back to the division headquarters. There, he was asked if he could type, and, since he could type 50-60 words a minute, he was assigned to the awards and decorations branch, where he typed out reports for soldiers to apply for medals and ribbons.

“All the awards went through that department,” Payne said. He became the section chief and, unlike most clerks, he went into the field to talk to soldiers to fill out paperwork for their medals.

“That way, a lot of the guys who wouldn’t have gotten their awards got them,” Payne said.

Eventually, he was in charge of a seven-man team working two shifts to process all the paperwork. And, despite being a clerk, which sounds like a safe job, being stationed at division headquarters made them a target for both attacks by enemy soldiers and rocket attacks.

“I drew as much fire back at base as I did out in the field,” Payne said, adding the base was about three miles wide and had radio towers, a helicopter landing pad and a general at the HQ, which made them a tempting target for the enemy. “We were a prime target.”

One time, the base was under rocket attack and Payne and another soldier tried to get into a bunker, but it was too full and they just laid flat on the ground and hoped for the best.

A rocket hit very near to them and it threw Payne four feet up in the air and blew his helmet off.

When he got up, he couldn’t find his friend and thought he had been shredded by the concussion of the rocket.

“I was looking around and thought ‘Jimbo’s been hit,’” Payne said. “About a half hour later, Jimbo comes up the street and was cussing and fuming and ranting.”

Turns out, Jimbo had been blown about 200 hundred feet in the air and landed in a ditch behind the latrines.

“And he was lying in about everything you can think of,” Payne said. “And he got some shrapnel scratches on his arm and a concussion.”

They went over to get him checked out by medics and they refused to treat him before he took a shower.

“I don’t know how Jimbo got by, he was within 20 feet of that rocket,” Payne said. “I figured he was shredded.”

After that, Payne and Jimbo took to sleeping in the bunker because it was cooler and didn’t have to worry about rocket attacks.

In 1969, Payne was transferred back to the states to Fort Benning to be part of the Congressional Correspondents Office. His new duty was to respond to requests from government officials asking for information.

They asked him to stay in the army but said he wouldn’t do it for less than $1 million and the rank of two star general. Needless to say, he didn’t get that.

During his time, Payne got two Bronze Star accommodations and left the service as a sergeant.

After his two-year stint was up, Payne came back to South Point and got a job in the mining industry as a design draftsman. Then, after that, he had a number of jobs.

“I did a little bit of everything. I had my own construction job and everything,” Payne said. He helped build apartment buildings and designed buildings for Ashland Coke and the original Hecla fire station.

He got a job at Ohio University in the 1990s because he got tired of trying to find good workers for his company.

Built to be a blessing