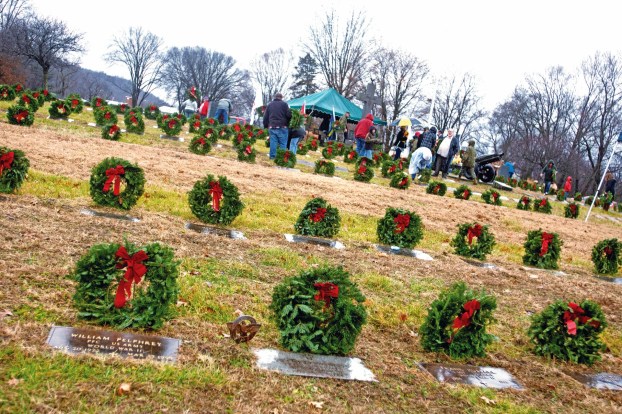 On Saturday, a crowd gathered to honor the fallen by putting a wreath on every veteran’s grave in Woodland Cemetery as part of the local Wreaths Across America event in December 2019. (The Ironton Tribune | Mark Shaffer)

This year, the local celebration of Wreaths Across America will be Dec. 19.

Every year, hundreds of people gather at the Soldiers Plot in Woodland Cemetery to place evergreen wreaths on the graves of those who served America in the military.

There is normally a speaker, a prayer, high school ROTC members who help with the ceremony and honor guards by local veterans’ groups.

And because of the pandemic, it may be a little different this year.

Coordinator Laura Brown said they will ask the ROTC group to come in, but isn’t sure if they are allowed to attend.

The program is already set up.

Brent Pyles will be the master of ceremonies. Father David Huffman will give the prayer and the speaker will be Lawrence County’s 2019 Veteran of the Year, Matthew Jenkins, a Chesapeake native who served in the U.S. Army from 2005-2010 and the National Guard from 2011-2016. He currently serves as assistant chief of the Aid Township Volunteer Fire Department.

Brown and her sister, Sally Ingles, took over coordinating the event from Linda Dalton and Juanita Southers, who started the local Wreaths Across America seven years ago. The pair got the idea after they saw the Wreaths Across America event in Arlington National Cemetery in Washington, D.C., where a live evergreen wreath was placed on the graves of every veteran.

They were so touched and inspired they came back and decided they wanted to do the same here in Lawrence County. So, they contacted the national group and became the local coordinators of the event which takes place in mid-December before Christmas.

Brown started helping with Wreaths Across America around three years ago and Ingles has been involved for about two years.

“We gradually started learning the wreaths and how to do it,” Brown said. “And last year, they stepped back and let us have at it.”

Brown said she and her sister were happy to help coordinate the event because of a long family tradition of serving.

Last year, the local Wreaths Across America achieved their long-time goal of getting live wreaths on all 1,100 veterans’ graves in Woodland Cemetery. It was the last request of Southers who passed away in July 2019.

“That was always Juanita’s wish, to have a wreath on every grave, but she never got to see it,” Brown said. “But we did it.”

Brown said they don’t think it they will be able to do the same this year.

“We haven’t been able to fundraise because of the pandemic,” she said. “Wreaths Across America would set up at public events and especially at veterans’ events. This year, most of those events didn’t happen because of COVID-19 precautions and the group wasn’t able to raise as much money. For every two wreaths they sell, they get a wreath for free.”

Their goal is to try to get at least 1,000 wreaths, but Brown isn’t sure if they will reach that goal.

Brown said she and all the volunteers do this for one simple reason.

“We want to remember our fallen veterans, honor those who served and teach our children the value of freedom,” she said. “Now, we need this more than ever.”

In 2014, Wreaths Across America’s national network laid 700,000 memorial wreaths at 1,000 locations in the U.S. and beyond, including the Pearl Harbor Memorial, Bunker Hill and the sites of the Sept. 11 tragedy. All the fundraising and work is done by local volunteers.

The laying of wreaths ceremony will begin at noon. People are asked to show up around 11:30 a.m.

The wreaths will be taken down on Jan. 18 at noon.

Individual wreaths are $15. Checks can be sent to Wreaths Across America/Citizens Deposit Bank, 221 Railroad St. or P.O. Box 183, Ironton, Ohio.

Gary Payne, the assistant director of maintenance and operations at Ohio University Southern, served in U.S. Army in Vietnam. He... read more