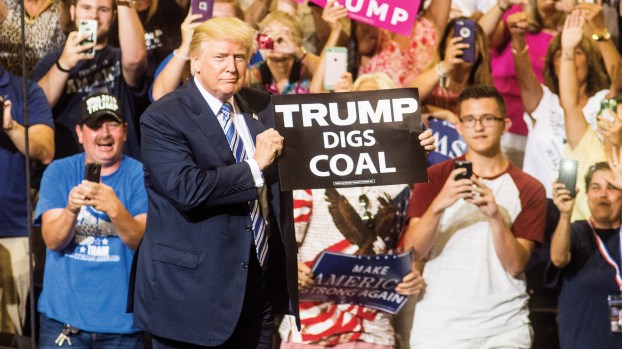 President Donald Trump holds a coal sig as he is greeted with rounds of supporters during a rally visit at Big Sandy Arena Thursday in Huntington.

COLUMBUS (AP) — President Donald Trump won more votes in this year’s presidential election than any candidate in Ohio history, certified county results compiled by The Associated Press indicate.
The more than 3.1 million votes cast for the Republican president in the Nov. 3 election exceeded the former record of 2,940,044 cast for Democrat Barack Obama in 2008. Trump won the state by a little over 8 percentage points this year and a slightly smaller margin than four years ago.
Trump grabbed about 53% of the state’s vote to Democratic President-elect Joe Biden’s about 45%, according to combined totals counties turned in between last week and Monday. The president’s ultimate loss to Biden broke the state’s streak of siding with White House winners, which, before this year, had held in all but one election since World War II.
Republican Frank LaRose has set a deadline of Saturday to formally certify the election results, a step required before the state’s 18 electoral votes can be delivered. He could act sooner, given the Thanksgiving holiday and the deadline’s timing on a weekend.
Biden also made a strong showing in the state with nearly 2.68 million votes, the combined 88 county totals show, more than every other candidate to lose the state besides Democrat John Kerry in 2004. Energy around the high-stakes contest helped push voting in the presidential contest — including for third-party candidates — to an apparent state record of more than 5.9 million.
After Trump and Obama, the next highest vote getters in Ohio history were Republican George W. Bush in 2004, Trump in 2016, Obama in 2012 and Democrat John Kerry in 2004. Formal certification will determine who falls next in line, Ronald Reagan in 1984 or Biden this year. AP calculation puts Reagan ahead by a mere handful of votes.

ROME TOWNSHIP — Students at Fairland West Elementary were thankful for a gift they received from the Rotary Club of... read more