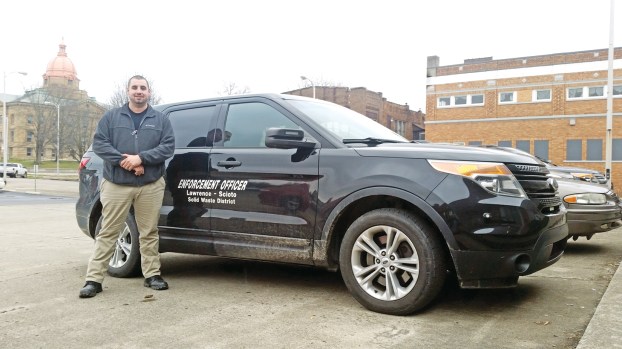 Seth Summers is the Lawrence-Scioto Solid Waste Management District new enforcement officer. The South Point resident recently joined the LSSWMD after being a jailer in Gallia County. His job is to investigate things like illegal dumping or other issues and get the problem fixed or cite the offender into court. (The Ironton Tribune | Mark Shaffer)

Back to full staff: Solid waste district hopes to restart programs in 2021

2020 has been a time of change for the Lawrence-Scioto Solid Waste Management District.

In May, the LSSWMD’s long-time executive director, Dan Palmer, retired. Many of the district’s most popular programs, like Ohio River Sweep, document shredding and electronic e-waste day, were canceled. The pandemic made it impossible to put on because of fear of volunteers getting sick or making people sick.

But, as the year comes to an end, they have a new enforcement officer and are hoping things get back to normal in 2021.
Stephanie Helms has served as the interim director of LSSWMD since Palmer retired. She has been in that office for 16 years as the Community Outreach & Education Coordinator.

“Everything has been smooth as far as the day-to-day operations,” she said. “We did have to cancel our spring events, due to COVID. Nothing to do with the transition or staffing. But we are hopeful those events will all be on the calendar in 2021.”

The LSSWMD is now back up to full staffing. Zach Evans is the Litter Control Crew Supervisor – Scioto County. His Lawrence County counterpart is Larry Coleman, who has been with the LSSWMD for over 10 years.

And Seth Summers is the LSSWD’s new enforcement officer.

The South Point resident came to the LSSWMD after working at the Gallia County Jail and has taken some police training courses.

“It was a great opportunity to come here and be back in my county,” he said.

He said that one of the things he didn’t realize before he took the job was how big an issue illegal dumping and litter control is.

“And also, it is a safety issue for a lot of families,” he said. “So if I can step in and help, I like that. And, I enjoy being outdoors and this job allows me to be out in both counties and help clean them up.”

Summers used to work at the Huntington Fire Department and has experience with not only firefighting, but hazardous material training.

“He brings a lot to the table that will be of benefit to these counties,” Helms said. “Some people think we deal with just trash, but he might get a call about a home that has a meth lab or someone who is burning chemicals.”

Besides examining the illegal dumps to see if it contains clues to the people who tossed the stuff out, Summers is also dealing with complaints of people who have excess amounts of junk or trash around their house or do things like having burn piles to close to a residence.

Because it is the holiday season, the LSSWMD is just asking people to clean it up but Summers does have the authority to cite cases into court if the proper steps aren’t taken.

Summers makes it a point as he drives around the counties to go by the recycling sites to make sure everything is good.

“He has come across people who are illegally dumping and he has made them put it all back in their vehicle and take care of it properly,” Helms said.

Recently, he came across a person trying to leave a mattress at the recycling spot in Wheelersburg. He made the man put it back in his truck, take it to the Portsmouth Transfer center and bring in documentation that it was properly disposed of.

Helms said the LSSW has been a model for other solid waste districts by the Ohio EPA and wants that legacy to continue.

“So, we have been very successful and now that we are back to full staff, we will continue that,” Helms said. One of the programs LSSWMD will be continuing is offering a $1,000 clean up incentive to any township or municipality that hosts clean up events for their residents.

“That’s exciting and something that people in the community look forward to, since it is an avenue to get rid of large items you can’t just set out with your weekly trash pick-up,” Helms said. “I’m hoping once everything with COVID is lifted, that it will get back to normal with our community service programs. They are so important to both counties.”

Currently, the litter clean-up crews are working separately in Lawrence and Scioto counties to try to stay as caught up as possible with recycling sites. One of the biggest issues they are facing is contamination of the recycling containers since people have been dumping household waste in them.

When waste like kitty litter or other garbage is put in those bins, then all the recyclables have to be taken to the dump rather than to the recyclers.

“So, our crews are out there every day at every site just to keep the grounds neat and attractive, so we can secure those locations and the property owners are pleased with the appearance,” Helms said. There is a total of 76 containers at 12 sites around Lawrence County. The crews are also targeting small dump sites and trying to track down the illegal dumpers. And to help prevent illegal dumping, the LSSWMD will be more aggressively using their video surveillance cameras.

The phone number to report dumping to the solid waste district is 740-532-1231. If it is after business hours, call the sheriff’s office to make a report.

For more information about the solid waste district and its programs, go to lsswmd.org.