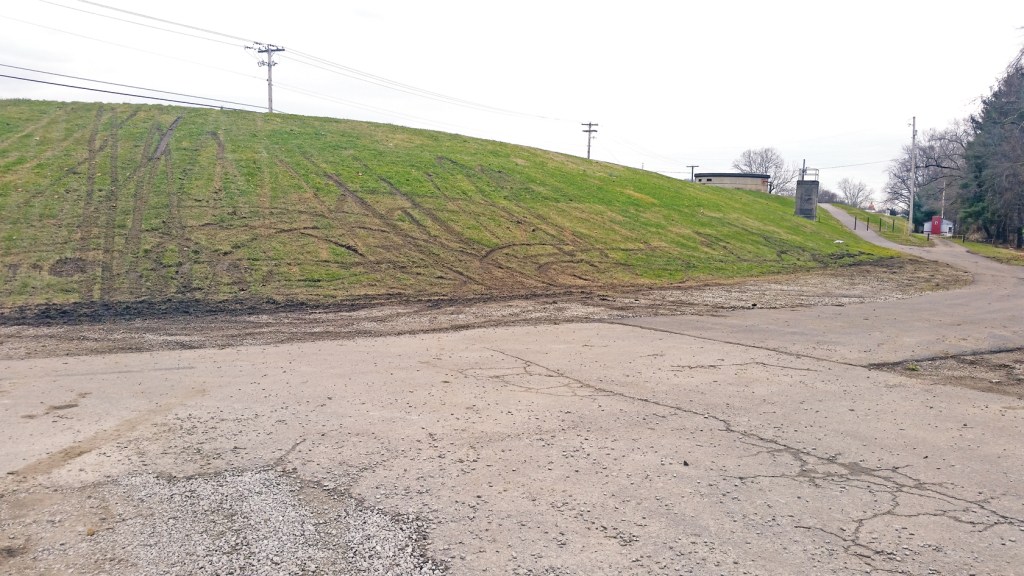 Damage to the Ironton floodwall levy by Storm’s Creek. Vandals drove a vehicle, possibly a truck, around and over the levy on Tuesday. (The Ironton Tribune | Mark Shaffer) 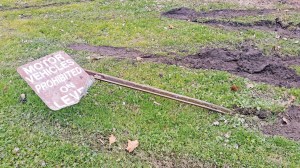 Vandals ran over a sign by the Ironton floodwall levy by Storm’s Creek on Tuesday. (The Ironton Tribune | Mark Shaffer)

The city is looking at the damage to the Ironton floodwall defense after someone used their vehicle to tear up the levy by Storm’s Creek.

“This happened probably Tuesday night,” said Mike Pemberton, superintendent of the City of Ironton’s Flood Control Department, as he surveyed the numerous tire tracks dug into the side of the hill.

The tracks are along the base of the hill and up and over the hill. The vandals even ran over the sign that said no vehicles are allowed on the levy.

“We don’t know who it was. I’m sure it was a pickup truck, a four-wheel drive pickup truck,” he said. “But it has done damage to the levy and the U.S. Army Corps of Engineers, they inspect the levy. And what has been done to it, it is uncalled for.”

Pemberton said he doesn’t believe the vandalism did any structural damage to the levy. But it does make it harder for the city workers who are in charge of cutting the grass that grows on it.

“When we do mow it, the tractors will have to run over big ruts,” he said. To fix it, workers will have to go out with shovels and rakes to smooth it back out. “That’s labor intensive to do that and when it shouldn’t have happened in the first place. There’s a sign that says no motor vehicles that they ran over.”

“The levy was built to protect lives and property,” Pemberton said. “And it looks bad. It is going to cost money to fill the ruts in, rake it out and re-seed it. This is public property and when public property is destroyed, it is you and I are going to pay for the cost.”

He said they don’t know what type of vehicle it was and no one reported the vandalism while it was happening.

“If people see vehicles up on the levy, get a license plate number. They can call my cell number,” Pemberton said. His cell number is 740-534-4098. “If they are doing anything to the structure of the flood wall or any public property, give us a call we want to know about it.”