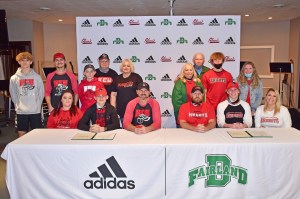 PROCTORVILLE — GO DEEP! I’ll hit you in Kentucky!
Fairland Quarterback Max Ward autographed his name to play for Kentucky Christian University where he will join his favorite target, Gavin Hunt.
“It definitely makes it easier to move in and have someone I know around for this next chapter of my life,” said Ward about Hunt and his decision to sign with KCU.
The standout quarterback threw for 2,056 yards this season completing 119-of-201 pass attempts for 27 touchdowns.
He suffered just 7 interceptions on the season and averaged 206 yards per game. 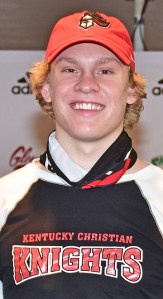 The senior connected with Hunt 50 times for just over 1,000 yards and 15 touchdowns.
“It was an easy decision,” said Ward. “They offered to pay a lot for my college and I felt really comfortable over there with the coaches and everything.”
Ward has made big improvements from a season ago where he threw for just 927 yards and 10 touchdowns, but his work ethic and determination are what sets him apart.
“The one thing I appreciated about him the entire time is his work ethic. Max went from his junior year to senior year and we saw a jump in not only his statistical numbers, but his leadership,” said Fairland head coach Melvin Cunningham.
“He’s going to continue to grow because he’s a very intelligent kid and you can see that through his ACT scores and GPA (grade point average). I am excited to see his progression as he’s there over time.”
Ward scored a 29 on his ACT and has a 4.3 GPA. He plans to major in History with emphasis in pre-law.
The senior is looking forward to joining the Knights and is excited about the offense.
“They throw the ball and I’m excited for that,” added Ward who is looking forward to “more stats” with his main man Gavin Hunt.
Ward concluded with, “I think it’s where I’m meant to be. It’s (Kentucky Christian University campus) not too close to home, but not too far either.”
The learning curve will be a bit different from the quarterback perspective, but Ward trusts the process and will continue to work hard on the field and in the classroom.