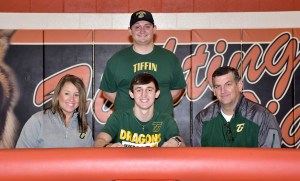 The late start on the gridiron didn’t stop senior Trent Hacker from signing his National Letter of Intent to play college football with the Tiffin University Dragons.
Hacker never played football in little league, junior high or even his freshman year of high school. That all changed when he went to the End Zone Pizza for a meet and greet with new Ironton head coach Trevon Pendleton.
“So, my sophomore year is when coach Pendleton arrived. The Pendletons have a great thing going and they just made me fall in love with this game of football. They helped me develop as a person and a football player. It was probably one of the best decisions of my life,” said Hacker on his experience with Ironton football.
The senior played in back to back state title games, and although they were unable to win, Hacker said it was the highlight of his time at Ironton.
“It was a great experience and seeing everyone in the town come together and support us was great,” added Hacker.
Despite having offers from Findlay, Walsh, Ohio Dominican and more, Hacker said he chose Tiffin for the culture.
“It is kind of like home away from home and it just felt like the right place for me. They won their league two years ago, and their culture is similar to what we do here,” said the standout wide receiver.
The first team All-Southeast District and third team All-Ohio selection had a 22-yards per catch average and hauled in 18 passes this season for 405 yards. He caught four touchdown passes.
These numbers come in a run heavy offense with limited pass attempts, but the 6-foot-3, 175-pound receiver made the most of his opportunities.
Joining him as a Dragon will be Fighting Tiger teammate Cameron Deere who will be his roommate.
“He is going to play defense and I’m going to be playing offense, but it’s a good feeling to have someone to lean back on and to lean on me when stuff gets tough up there away from home,” said Hacker.
Hacker plans to study business and hopes to prove himself as a freshman and get some playing time right away at the next level.

Hornets make clutch plays down the stretch to edge…