Wood off and running to Ashland U. track 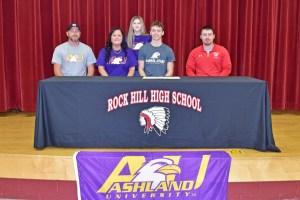 PEDRO — Forget “Run, Forrest, Run” from the movie Forrest Gump. Now it’s “Run, Noah, Run” from the career of Noah Wood.
The Rock Hill Redmen senior sprinter in track and distance runner in cross country spends a great deal of his time running. And, after signing a letter-of-intent with the Ashland University Eagles’ track team.
Wood did talk with Miami, Ohio, Tiffin and Kentucky Christian before he settled on Ashland, a member of the Great Lakes Intercollegiate Athletic Conference and perennial track power in NCAA Division 2.
“The biggest thing to me was just the atmosphere when I went up there. Coach (Jud) Logan was really awesome and super experienced. All the things we do we heard from him,” said Wood.
“I ate with the team and it was just like being with my team. The campus is not huge and I can come back pretty easy. It’s only about three hours.”
As a sophomore, Wood won the 400-meter dash at the regional track meet with a 49.48-second time to qualify for the state meet.
In the Ohio Valley Conference meet, Wood won both the 200- and 400-meter dashes and was on the winning 4×400 relay team.
In fact, it is those same events that will be Wood’s future races at Ashland.
“I’m going to be a sprinter. They want me in the 100, 200, 400 and 4-by-400 (relay),” said Wood.
Besides track, Wood was an outstanding distance runner for the cross country team that was OVC champs. Although Wood enjoys cross country, he admits that track is his better sport and main focus.
He said that his training in each sport has helped make him a better runner overall.
“During cross country we averaged 40 to 50 miles (running) a week. In track we won’t have to run as much mileage. I put in 10 miles work but mostly in sprints. I usually have one long run a week,” said Wood.
“I’d say I’m much more a sprinter than distance runner. But the atmosphere in cross country is so great. (Coaches) Mark McFann and Mike Miller do a great job.”
Due to COVID-19, spring sports were canceled last season and Wood said it was even more disappointing not to have a team because the Redmen were stacked.
“I didn’t’ compete in any races in the winter but I’ve been running all winter. I was bummed out about our outdoor season last year,” said Wood.
“Eli Baker (now at Kentucky) was the indoor state champion and was ranked 12th in the nation. (Tiffin signee) T.J. McGinnis was set to break records (in the shot put and discus). We were going to have a great season and break all kinds of records.”
Wood won’t see much of a training difference from Rock Hill to Ashland since Redmen coach Trey Wilds attended a clinic at Ashland and got to listen to Eagles associate head coach and sprint coach Ernie Clark.
“The same workouts (Clark) does we’re going to be doing,” said Wood who has set a goal of winning the state in the 400 meters.
Wood will have plenty of goals to shoot for at Ashland which has won the 2019 indoor and outdoor NCAA Division 2 national championship. The Eagles are led by sprinter, senior Trevor Bassitt who is the second fastest 60-meter indoor hurdler in NCAA D2 history.
“I’m really excited. When I talked to coach (Logan), he said this was going to be one of the best recruiting classes in a long time,” said Wood.
“I’m pretty nervous. I’ve only ran against really good runners in the district and regionals. Our conference is really talented but up there it’s really good competition every meet.”
Wood plans to major in Business management.