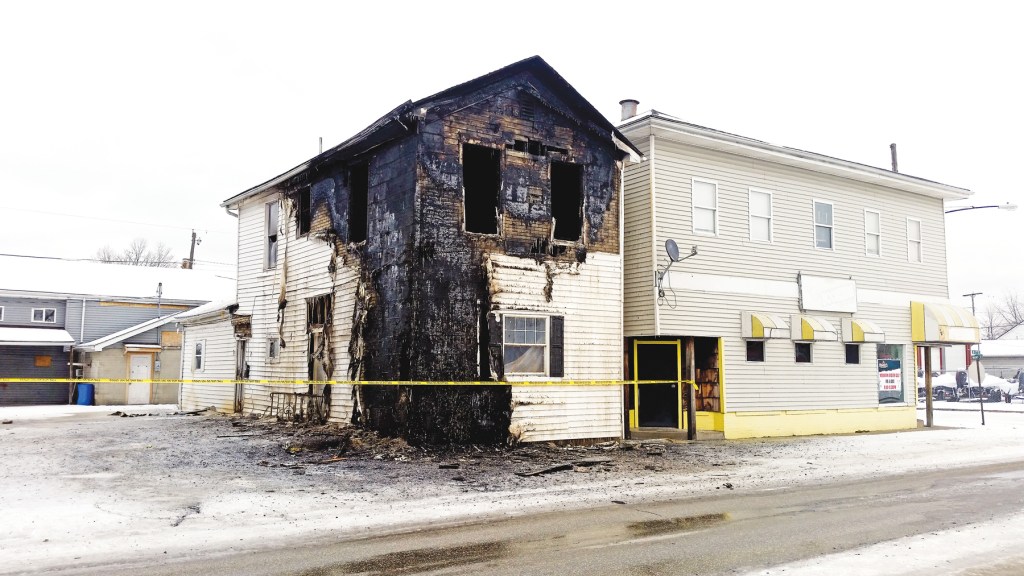 An apartment building in the 1100 block of Ironton caught fire on Tuesday evening. No one was home at the time of the fire and nearby buildings were not damaged. (The Ironton Tribune | Mark Shaffer)

An apartment on the 1100 block of Third Street in Ironton caught on fire on Tuesday night.

According to Ironton Fire Department Captain Jeff Joseph, the apartment had one resident who wasn’t home at the time of the fire.

“There is one occupant that we know of, but they haven’t come forward and we haven’t been able to track them down as of yet,” Joseph said. “We don’t know if they are staying with family or what, but they weren’t home when the fire started.”

The fire department was called out at 9:48 p.m. and was on scene for around three hours.

As of Wednesday, they didn’t know a cause for the fire and the Ohio Fire Marshal’s Office had been called in to investigate.

The majority of the damage was to the second floor of the building.

Joseph said the fire didn’t spread to any nearby buildings.

“The guys did a good knock down on the fire,” he said. “It didn’t damage any of the nearby buildings.”

This is the second fire Ironton has had since the cold snap began.

On Feb. 7, a house, located behind the Rax restaurant on Third Street in Ironton, caught on fire. The home hadn’t been lived in for a while and it is suspected that the fire was caused by homeless people who were sheltering in it.

Joseph said that it isn’t unusual in cold weather to have house fires.

“It isn’t unusual to have a number of house fires when it gets bitter cold like this,” he said.

Owners of unused buildings are reminded to secure them by boarding up windows and doors on the ground floor to help keep the neighborhood around them safe from unwanted fires, drug activity and other dangers.