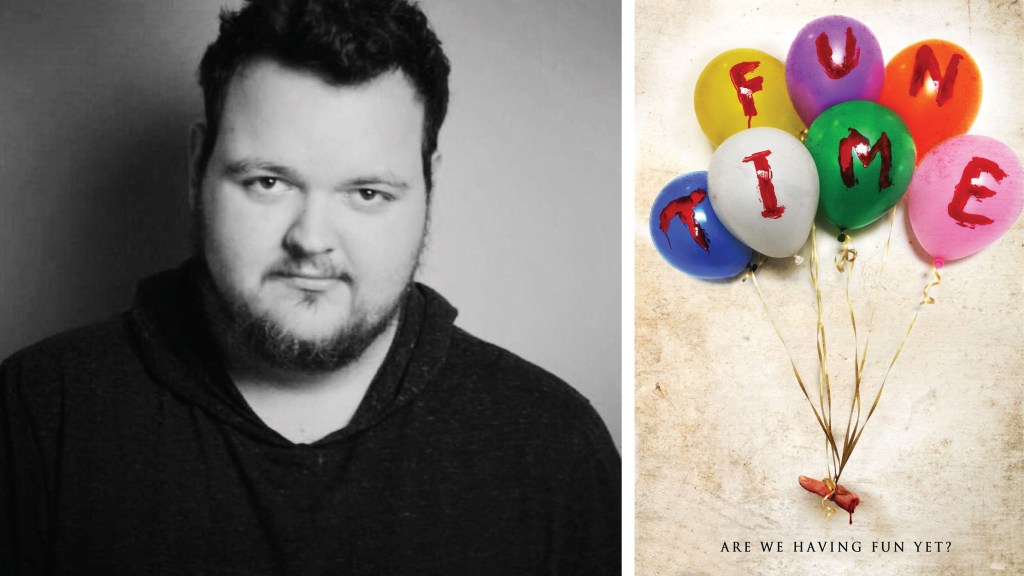 It was Wes Craven’s “Scream,” a 1999 film that both parodied and was a love letter to slasher films.

It was the movie that set him down the path to making his own movies and to eventually meeting the film’s stars.

In fact, his mother, Tracey, recalled that when he graduated from Fairview High School, he turned down an offer from his parents to buy him a car.

“We were going to get him a used car for graduation and he said he would rather have movie equipment,” she said. “I asked if he was sure and he said yes. And he recruited friends that he had acted with in theater that wanted to build their portfolios. And that’s how he got started with no budget.”

And he also recruited his family into helping him make films.

“I am so blessed and lucky to have a family that is not only artistic, but very supportive,” Michael Taylor Pritt said. “I know people that have the same passions and ambitions that I have, but they don’t have that family support. To go on this journey and make films with family is amazing.”

His mother acts in the films, helps promote them and does set and prop design.

His sister, Shandi Rae Pritt, is a videographer who filmed weddings and she also got recruited into shooting and making props.

His dad, Mike, is a bit of a reluctant actor. He has played the killer in a couple of the films but prefers to be masked. As the owner of Omni Complete Auto Repair, he much preferred letting them use some space at the business as a movie set than appearing in the first film, “Fun Time.”

“He let us have it for one week, that was it,” Tracey said. “We divided the room into sets and we made our own props.”

Michael Taylor Pritt says he just really enjoyed movies when he was a kid and wanted to be an actor more than anything.

“I just really enjoyed playing make believe when I was a kid. I just realized at a young age that is what actors did for a living,” he said. To that end, he acted in a lot of local productions at the Paramount Arts Center and other places.

As a teen, his love of films continued, but he found himself drawn to the making of films.

“I didn’t know that much about it, but with research and the right equipment, I thought I could take a shot at it,” he said.

One thing on his side was that modern technology of digital cameras and computer editing made making a film a lot easier and better looking than in the film camera era.

“Most people these days have a smart phone in their pocket and the cameras on those are phenomenal,” he said.

One of his favorite directors is Wes Craven, who is responsible for many horror classics, including “Scream,” “The Hills Have Eyes,” the “Nightmare on Elm Street” series and “The People Under the Stairs.” He is also a fan of musician Rob Zombie, who also wrote and directed “House of 1,000 Corpses,” “The Devil’s Rejects” and two “Halloween” reboots.

“I really enjoyed films that were very raw and made you feel like you needed to take a shower,” Michael Taylor Pritt said. He enjoys the films of Zombie because, not only are they scary, they felt like they could be real.

With those directors and stories in mind, in 2015, Michael Taylor Pritt wrote, acted in, directed and filmed his first film, “Fun Time,” which was shot in Ashland at his dad’s garage and at the family home and focused on a killer clown, one of his childhood fears.

“As a kid, I was terrified of clowns and, sadly, have never seen them in a positive light,” Michael Taylor Pritt said, with a chuckle. “I feel like clowns go well in scary things, because while they aren’t wearing a mask, you can’t tell what their intentions are because they are hiding their emotions.”

Tracey Roberts Pritt is more of a fan of the original Michael Meyers movies than the Rob Zombie versions, so she wasn’t thrilled about the gory stuff in “Fun Time.”

“I wasn’t crazy about it, with the scary clowns,” said the long-time horror fan. “But they had a blast making it.”

Michael Taylor Pritt said he wanted “Fun Time” to be something scary and intense and something with a harsh reality.

“There was some humor and shock in it, but I think that the shocking material has to have a point,” he said. Part of the film was sort of a movie payback to the people who bullied him in high school. “I placed what they did in the film and had the clowns do it because it seemed ironic to me in some way.”

One bit of the film came about by accident. They were shooting the film during 90-degree summer weather and forgot to put up some meat before they left for the night.

“We came back and there were maggots,” Tracey Roberts Pritt said. “So, we wrote that into the script. People asked where we got those at and I just told them you leave meat out in a garage and you get them for free.”

“Fun Time” sold out during it’s premiere at the KYOVA Mall and has fans across the states.

“I’m making my fifth film now, but when I go to horror conventions, ‘Fun Time’ is the one that people bring up to me,” Pritt said. “They ask if I am going to do a sequel, so I guess it did relatively well.”

His next films are “Miles Before Sleep” (2016), a hillbilly horror film shot in Coal Grove; “Night Howl,” a werewolf film; and their slasher film homage to “Scream,” “We Are We Are The Waiting,” (both 2017).

Most of the films are available on DVD and online streaming.

The Pritts were happy and a bit confused to find out that “Night Howl” was being sold on DVD at Walmart rather than his films’ usual video on demand streaming.

“It was so weird to me,” Michael Taylor Pritt said. “I always thought it would be cool to even have a bargain bin movie.”

He found out from a fan in Arizona that he had bought the DVD and Pritt was rather confused by that since he thought it was just going to be online at Target or Walmart.

“I told him that he may have seen someone else’s film or something and I was almost fighting the guy about it,” Michael Taylor Pritt said.

But he went to the Walmart in Ashland and there was his film on the shelf.

“To be able to walk into a Walmart and buy my film isn’t something I have wrapped my mind around yet. It is a bit crazy,” he said. “It’s very odd.”

Turns out that the film’s distributor was talking to Walmart about a DVD four pack of horror movies and the Walmart executives weren’t thrilled about the werewolf movie, so the distributor suggested “Night Howl” and it was accepted instead.

It was at a horror convention that Michael Taylor Pritt ran into two of his idols, Matthew Lillard and Skeet Ulrich, who played Stu Macher and Billy Loomis in “Scream.”

He said it was weird to hang out with them and talk to the guys. He knew that when they started do the horror conventions to promote their movies that film stars would be there, but he thought he would just go up to them and meet them and have a little fan interaction.

Instead, they set up their table and Lillard and Ulrich were set up across from them.

The movie star made it a point to walk around and talk to everyone about their projects.

“I was excited because they were the stars of the first horror film I saw,” Michael Taylor Pritt said, adding that Lillard introduced himself as Matt. “To me, I thought that would be it, a quick handshake and then he’d move on.”

Instead, they had a couple conversations.

His interaction with Ulrich was a little different, since he had been terrified of his “Scream” character for years.

One night they went get on an elevator at the hotel and tried to tell them that they would just catch the next elevator since it was packed with the convention’s celebrity guests, but were told it was fine and to hop on.

As the doors closed, Michael Taylor Pritt mentioned that it was probably a bad time to mention that crowded elevators made him claustrophobic.

“Skeet just leaned and hugged him, gave him that Billy Loomis look and said ‘Really?’ He kept up that evil smile until we all got off the elevator,” Tracey Roberts Pritt recalled.

“And everyone laughed, but Skeet gave me that Billy Loomis’ smile and it was so cool,” Michael Taylor Pritt said.

A couple years later at a different convention, Michael Taylor Pritt walked past Ulrich’s table and he remembered him.

“He went “Oh, you’re that ‘Fun Time’ guy,” Michael Taylor Pritt recalled. “So, that was neat since ‘Scream’ is one of the reasons I got into filmmaking. And it was weird since I grew up with him as Billy Loomis and he was being a really nice guy to me.”

With the pandemic making it hard to have a cast and crew together to film sometimes, they are continuing to work on his latest film, “Bloody Holiday,” a bit of a love letter to the horror films of the 70’s and 80’s, many of which had themes so they could be timed to coordinate with various holidays.

Tracey Pritt is playing a “Karen,” a reference to memes depicting certain white women with poor behavior stemming from privilege, in the film, which she enjoys since she didn’t like some of her other roles.

“I have played a mean, evil mom in the other films. I have been type casted,” she lamented. “I don’t know if my kids are trying to tell me something.”

Besides his movie, Michael Taylor Pritt is also focusing on a musical project called Two Dollar $am, with the name coming via a VHS copy of “Space Camp” that was in a box of films a friend bought him at a yard sale. The sales sticker on the box said “$2 Sam,” which Michael Taylor Pritt thought sounded like an odd insult.

“Music is my main focus now,” he said. “I always wanted to be in a band and it never panned out. I knew I would probably have to be a solo artist to start out to prove I have some skills.”

He would rap at parties to amuse his friends.

“They would think it was hilarious and I had a bit of a dream to be a comedic rapper,” Pritt said. “I never had a name until I found the name on the box of ‘Space Camp.’ I thought it was a funny name.”

He used the name for his EP “Financial Problems.”

“After I did that, although the name sounded terrible, I started relating to it. It sounds like a nickname, like ‘Look at that guy, he looks like a regular two dollar Sam, he looks like he’s down on his luck.’”

After Two Dollar $am took off, Michael Taylor Pritt realized “this is the name I am going to have to live under now,” he said, with a laugh.

He released an album in September and has set up an Indie-Go-Go fundraiser to produce another EP, this one in more of a pop punk style.

“We are almost at our goal. Once we hit that, we will start recording,” Michael Taylor Pritt said. “It’s the dream music project I am working on now.”