Switching from ‘no’ to ‘go’ sends Stevens running to Wilmington 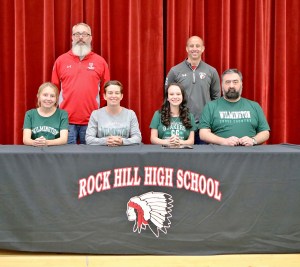 PEDRO — Bella Stevens found out that the old saying to “Never say never” is real.
The Rock Hill Redwomen senior running standout once said “no” to cross country. Nine years later, cross country has been her life and it will be for at least another four years.
Stevens initially put up some resistance to a running career, but that change quickly and it culminated on Saturday as she signed on Saturday afternoon to run cross country and track for the Wilmington Quakers.
Stevens was part of the first elementary cross country program at Rock Hill when she was in the fourth grade. High school coaches Mark McFann and Mike Miller were at the heart of the program and saw her potential at a young age.
“They had a run for a fundraiser for the football team, so my mom (Myra) took us out there and we ran. I didn’t necessarily want to do it, but Mike approached my mom after the race and said, ‘Hey, she’s got a lot of energy. We’re looking for some little kids who can run. Bring her out to a few practices and see how she likes it,’” Stevens recalled.
“I didn’t want to go. But mom was like, ‘you’re gonna go out there and you’re going to see how it goes. It just stuck. I’ve been here for nine years.”
And it has been a decorated nine years including this past season. Stevens earned All-Ohio Valley Conference and Southeast Ohio All-District honors as the Redwomen won the league title and were district runners-up as they qualified for the regional meet for the third straight year.
Stevens said she looked at several schools but the colleges that stood out were Ohio Wesleyan the University of Findley which has a top-notch veterinarian program.
But when it came time to pick the winner, Stevens had to go with Wilmington.
“I chose Wilmington because their pre-veterinarian program is a top tier program. They have a barn so I will be able to work with animals every single day. And it’s not like we don’t get to work with them until our junior or senior year. We immediately go in freshman year,” said Stevens who will major in pre-veterinarian with a minor in biology.
“On top of that, they also have a very good cross country program and when I met the team and the coach, it really did feel just like home.”
At just a shade taller than 5-feet, Stevens said her size was an advantage early in her freshman year, but when girls hit their sophomore year their body changes and I don’t think it gave me the biggest advantage,” said Stevens. “But I was definitely able to squeeze into those (tight) corners a lot easier when we were at meets.”
Stevens knows she will have to put more time and training as she steps up to the next level.
“I’m going to have to continue training harder. I normally take off between track and cross country. Then in the summer I run twice a week,” said Stevens. “Now, I’m going to be running six out of seven days a week, sometimes even seven days. I’m going to do a lot of weight lifting.”
Miller and McFann were not only the coaches who baptized her into the cross country program, but they coached her all nine years. Stevens said they have been the biggest influences in her success.
“The most motivational thing for me was my coaches. Mike and Mark were never those people who looked at you and were upset about how you did. Did they let you know you had a bad day? Yes, of course they did. Every coach is going to let you know if you had a bad day,” said Stevens.
“But they were never ones to put you down about it. They are the reason why I’m where I am today. If not for them, I wouldn’t be here signing for cross country today. They’ve been a very big part of my life.”
Stevens’ sister Emmi plays soccer and softball for Rock Hill but may try her hand at cross country this fall.
“I kind of do my own thing and she does her own thing,” said Bella.