Ironton’s Tower House to be featured on HGTV 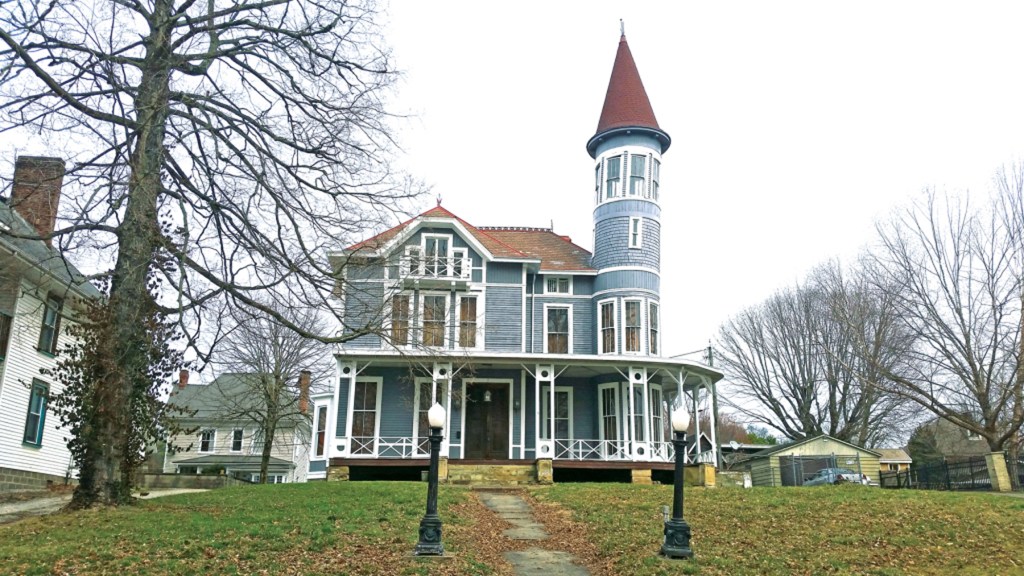 The Tower House, on South 4th Street in Ironton, will be featured this summer on HGTV’s “Cheap Old Houses,” which follows Instagram stars Ethan and Elizabeth Finkelstein as they tour interesting houses across America which cost less than $150,000. (The Ironton Tribune | Mark Shaffer)

Will be featured in premiere episode of ‘Cheap Old Houses’

On Tuesday morning, a crew from HGTV was in Ironton to film the Tower House on South 4th Street.

The filming of the house was for a new program to debut this summer called “Cheap Old Houses,” which follows Instagram stars Ethan and Elizabeth Finkelstein as the tour the country looking at houses that sell for $150,000.

Heather Williams, a realtor with the Proctorville-based Bunch Real Estate Associates, said she thinks the couple found the Tower House because she posted about the house and the Finkelsteins saw it.

“I guess HGTV discovered the couple and their Instagram page and decided to give them a show,” she said. “I guess they saw the Tower House after I posted it on Historical Houses of America. They contacted me and they had chosen, I think five houses in Ohio, and this was one of them.”

Wallace sent them information and HGTV selected two houses in Ohio, including the Tower House.

“The house is going to be on the first episode of “Cheap Old House” in the beginning of the summer,” she said. “It’s really cool they are putting our house on television.”

According to HGTV, “Cameras will follow Ethan and Elizabeth as they visit cities and small towns across America to tour two low-priced older houses and share stories of the homes’ historical significance and architectural uniqueness.”

The Tower House is in the closing stages of being sold and Wallace said the new owners were excited that their purchase is going to be on HGTV.

The Tower House, a gray four-story house with a tower that leans slightly, was built in 1874 by ironmaster Frederick Norton, the owner of the Norton and Belfonte Iron works. Architectural details include a cameo etched into the front door knob, fretwork molding and the floors are made with yellow poplar, the same type of wood used in the iron blast furnaces.

The tower that gives the house its name is odd in the fact that it tilts slightly away from the house, but the tower roof is still parallel to the house.

“It’s very strange,” Wallace said. “But we had an architectural engineer come in and he said it is structurally strong, it’s not going anywhere.”