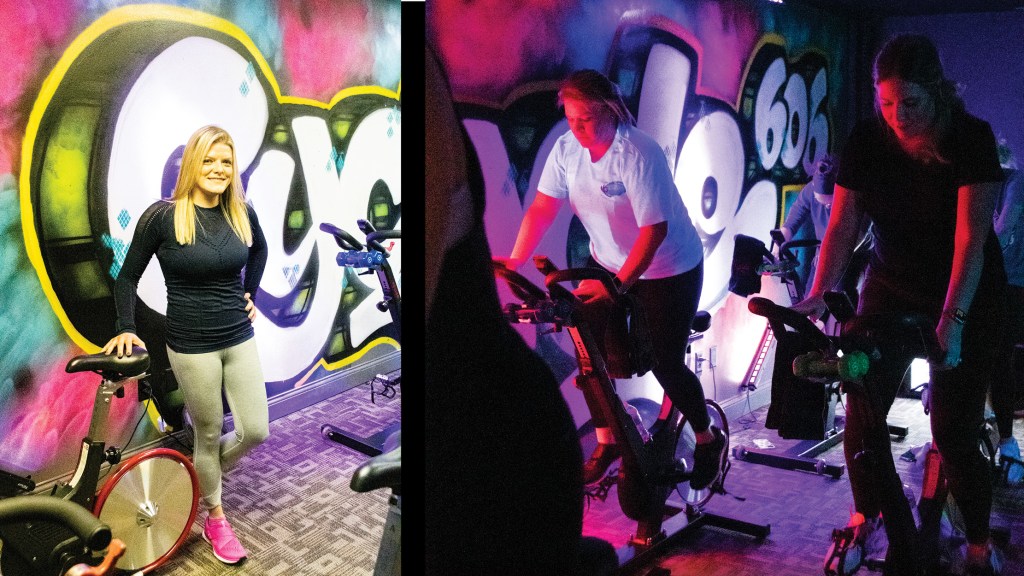 The Ashland native opened indoor cycling “spin studio” in downtown Ashland in 2019. The business, Evans explains, is not about making money, but sharing the joy the healthy exercise creates with her hometown community.

Lauren and her husband lived in Louisville for six years. While there, she started spinning at the local YMCA. “Really, I fell in love with it,” she explained.

When the couple moved back to Ashland, she couldn’t find a local equivalent to the classes she was used to.  Instead, she began commuting to Huntington to spin, but soon the drive back and forth became too much to balance with her growing family — she has two children — and her demanding job as an X-ray tech in the vascular lab at Kings Daughter’s Medical Center.

Evans resolved to start her own spin studio. She was completely undaunted by starting a new business, she said, noting “It’s never been far from my head, and my dad was able to help me with it. He helped me through the whole process.” Her parents are second generation owners of Slone Refrigeration, which has been in Ashland for nearly six decades.

With the help of her dad, Evans quickly found a location in a downtown building. She was insistent that the studio be in Ashland’s Central Business District. “I wanted to be downtown. My dad is on Greenup Avenue, his business has always been in Ashland and I wanted to be in Ashland. I am super supportive of reviving our downtown. Since I moved home it has grown by leaps and bounds,” she added, noting she has watched the opening of the Delta Hotel Ashland Downtown and the boost it has given the district. “Other buildings are getting redone, there is just so much in downtown Ashland. I feel like it is reviving, people are investing downtown and I wanted to, too,” she added.

The studio space she secured is tiny, Evans admitted.  It previously served as the break room for the Saybolt Inc. and before she filled the space with 12 brand new Keiser indoor bikes, it had an old countertop and a refrigerator. A visitor to the space would never know that now. Although small, it’s cozy, and Evans and her family worked to remodel the space into a perfect spin studio, adding new lighting — including black lights — painting, wiring a new sound system, and installing a large television where clients can see their rankings against classmates in real time during class.

“We made it a really cool space,” said Evans. The Keiser bikes she chose to outfit the studio with are top-of-the line indoor bicycles that are fully-adjustable and allow users to connect to them via Bluetooth to track every workout. What she likes best about the bikes, however, is that they are good for people of all ages and abilities. Evans noted Keiser bikes are the go-to fitness machine to rehab patients after joint replacements and are used in nursing homes for older residents because the exercise is so gentle on the joints.

That said, you can still get a wicked workout on one, said Evans, “It’s a very modifiable exercise and you are going to burn a ton of calories doing it.” Especially if you are taking one of her classes.

Evans teaches the early 6 a.m. morning classes three days a week but admits she was hesitant to teach at first — in fact, her best friend Kayla began instructing at the studio before she did.  “I am kind of a little bit of a control freak. I knew what I wanted in a class but I was too scared to teach. I am a very introverted person, to be in front of a class was a big thing for me,” said Evans. Eventually she climbed on the front bike and the rest is history.

“Ever since then I have been obsessed with it,” she said, “Up there on the front bike, that is my happy place,” and the people who come to her classes, those are “her people.” “I hear them say, ‘this is my happy place. This is my escape. I need it so bad,’” Evans feels exactly the same way, “It is my happy place for sure.”

Classes at 606 Cycle are always high energy with music that will get you moving, even in the early morning or after a long day of work. Even for beginners, the instructors focus on guiding clients through a work out encouraging and pushing them. For those new to cycling, Evans does offer some wider, padded seats and this piece of advice:  It takes two classes to work out the soreness. After that, it goes away. You don’t even notice it anymore,” she says.

The level of classes is all the same, and again, participants are free to modify not only the moves but the bikes resistance and other settings. Evans said she couldn’t stand up and cycle herself the first time she took a spin class. She did the entire thing sitting down and that was fine, she worked at it until she could.  “There is a little bit of a learning curve,” she said, “But all our classes are the same level. You’re going to pick it up pretty quick.”

Evans does teach a “beginners” class on Saturday mornings, but the class is by no means easy. The biggest difference is Evans spends some additional time in the class helping people modify their bikes, and explaining in detail what all the moves are and how to modify them. But, she cautions, be ready to rev up your heart rate. “It is still going to be hard. You are going to sweat,” she warned.

One of the biggest perks of Cycle 606 studio is its location right next to Eternal Yoga. The fitness studio is owned by Kathy Meija and the women quickly began collaborating. They now offer two distinct cycle fusion classes that give clientele a workout they won’t find anywhere else. The classes start off with a 30-minute cycle at Cycle 606 and then move to Meija’s studio for either a barre workout or a yoga session.

Evans sees the collaboration as just the beginning, and hopes to be able to expand her offerings someday — her classes are frequently full and there is often a long waiting list for the popular fusion offerings. But for now, she’s happy in her small studio.  “I’m not out to make money. I just want to pay my rent. This is my side hustle,” she explained.

She just wants people to find their happy place at Cycle 606 and keep coming back for more.

Classes at 606 Cycle are offered throughout the week. A 6 a.m. class is offered on Monday, Wednesday and Friday and is taught by Evans. The class is a fast and furious 30-minute session, that is sure to make you sweat. Evening classes are offered on Tuesdays and Wednesdays at 6:00 p.m. On Friday night the studio offers a Glow Ride at 6:30 p.m., complete with those black lights. On Saturday’s Lauren teaches a beginner’s class at 10:45 a.m. Classes are always $12 for a drop in, passes for 3, and 5 classes are also available at a discounted rate through the Mind Body app or online.