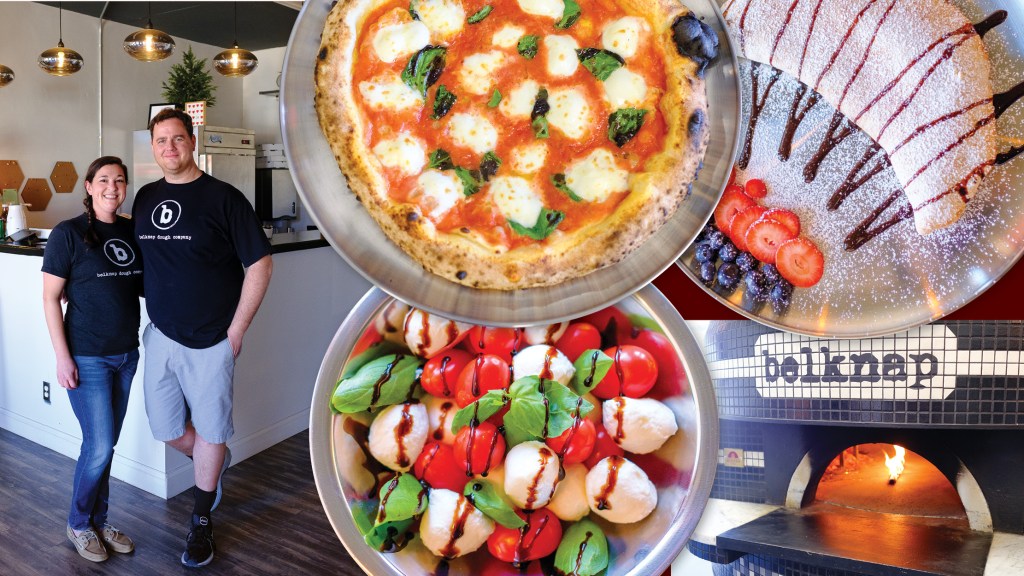 Examples of some of the pizzas Belknap offers are the Piggie Pie, with ham, bacon, sausage and mozzarella and provolone cheese; the Taco Pie, with a garlic base, seasoned beef, corn and ranch drizzle, and The Goat, with spinach, fire roasted tomatoes, goat cheese and a balsamic drizzle. (Photography by Jeremy Holtzapfel)

It was three years ago when Jimmy Belknap, and his wife, Amber, of Scott Depot, West Virginia, decided they wanted to start a mobile business.

Jimmy had worked his entire life in the oil industry, while Amber had worked in behavioral health.

“We had no chef experience,” he said when they started their food truck, offering brick-oven fire specialty pizzas, salads, pepperoni rolls and other menu items.

He said for them it was a matter of doing research and teaching themselves to cook before establishing Belknap Dough Company.

“We learned everything first hand and by using Google and YouTube,” he said. “So we started developing things.”

He said for their brick oven, they imported it from Naples, Italy.

“It comes from the Acunto family,” he said, describing them as an old generation of oven makers. “Each block of it is hand-pressed from the earth and ash of Mount Vesuvius.

They partnered with Forza Forni, a New York company, in exporting it to the U.S.

The heat of the oven allows for the pizza to be cooked in a matter of minutes, which gives it a smoky flavor.

Examples of some of the pizzas Belknap offers are the Piggie Pie, with ham, bacon, sausage and mozzarella and provolone cheese; the Taco Pie, with a garlic base, seasoned beef, corn and ranch drizzle, and The Goat, with spinach, fire roasted tomatoes, goat cheese and a balsamic drizzle.

Jimmy said for the next few years they built a solid customer base, based on the menu items and the “wow factor” of the truck, which operated primarily in Putnam County.

It was at that point that he and Amber decided to open a restaurant and park the truck for a more permanent location, less dependent on the seasons.

“We got a lease from the city of Hurricane,” he said of their location at 2725 Main Street in Hurricane. “Then COVID hit.”

He said it was a challenge, starting off during the pandemic, which had previously closed indoor dining for some time.

But they have managed to keep their momentum going, offering curbside pick up and carry out and indoor service when they hosted their ribbon cutting in November.

Regarding the brick oven process, Jimmy says “It’s a love to do it,” and said it takes just the right ingredients.

He said, for those ingredients, they make every attempt to purchase them locally.

Their salad ingredients come from nearby Gritt’s Farm, while for the pizzas and other items, they go to Call’s Meat Market, also in Hurricane.

“And our mushrooms come from Hernshaw Farms,” he said.

He said he owes his success to the backing of his family, especially his daughters, Taylor and Payton.

“If it wasn’t for them behind us, this wouldn’t be possible,” he said.

And he gives a special thanks to the community.

“The reception has been astronomical,” he said. It’s terrific. If it wasn’t for the community, we wouldn’t be where we are.”