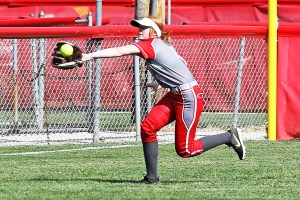 AID — The Symmes Valley Lady Vikings got one win and they let another one get away.
In the annual Valley of Thunder softball classic, the host Lady Vikings fell behind 10-0 and nearly rallied to beat the Crooksville Lady Ceramics on Friday.
However, they did keep the momentum going as they beat the Smithville Smithies 12-2 in a 5-inning run rule game.
“The kids showed a lot of composure against Crooksville. We got down 10 runs and kept battling back and we had our opportunities to win,” said Lady Vikings’ coach Jeff “Odie” Estep.
“In the second game, we got good pitching, hitting and defense. I think the way we played toward the end of the first game just carried over.”
In the first game, Crooksville took a 6-0 lead in the second inning.
Chamberlain and Nelson reached on errors, Headley singled, Frame walked and Nelson had a 2-run single. A. Theiser singled, J. Theiser doubled home 2 runs and later scored on a wild pitch.
The lead went to 10-0 in the top of the fourth.
Nelson walked, Headley singled and O’Neal doubled for a run. Frame then hit a 3-run homer that proved to be the decisive blow in the game.
In the bottom of the fourth, the Lady Vikings got 3 runs.
Kylee Thompson and Kelsie Gothard singled and an out later Emily Estep crushed a 3-run home run over the fence in centerfield.
Symmes Valley (8-3) got a run in the fourth when Thompson singled, moved up on a passed ball and scored on Gothard’s double.
The Lady Vikings inched closer with 3 more runs in the sixth.
Estep walked, Lauren Wells singled, Jocelyn Carpenter hit into a fielder’s choice, Kylee Jenkins singled in one run and Kaitlyn Stevenson singled home 2 more runs.
Symmes Valley outhit Crooksville 11-10 as Wells and Jenkins went 2-4 and Thompson and Gothard 2-4.
In the second game, the Lady Vikings left no doubt about the outcome a 12-hit barrage.
The Lady Vikings got a run in the first as Desiree Simpson reached on a dropped third strike, Thompson was safe on a fielder’s choice and Gothard doubled home Simpson.
Another run scored with one out in the second when Wells doubled, Jocelyn Carpenter singled and a throwing error scored the run.
The Lady Vikings went up 6-0 in the third.
Simpson singled, Thompson walked, Gothard singled and Estep singled home Simpson. Wells reached on an error for a run, Carpenter hit into a fielder’s choice for a run and Kylee Jenkins was safe on an outfield error for the final run.
The lead went to 9-0 in the fourth.
Simpson, Thompson and Gothard all singled for a run. Savannah Mart reached on an error for a run and Estep had an RBI single.
The final 3 runs scored in the fifth.
Simpson and Thompson both reached on errors, Lilly Schneider singled to load the bases and Gothard tripled to clear the bases and end the game.
Smithville got a run in the fourth when Kayla Baumgardner was safe on an error, moved up on a wild pitch and scored Chloe Cannon hit into a fielder’s choice.
The Smithies got their second run in the fifth when Kirsten Thut was safe on a one-out error, moved up on a passed ball and scored on Hannah Baker’s double.
Gothard was 4-4 with a double, triple and 4 RBIs to lead the offense. Estep was 2-3 and Thompson 2-4.
The Lady Vikings face Pickerington North at 11 a.m. and Hilliard Davidson at 1 p.m.
First Game
Crooksville 060 400 0 = 10 10 1
Sym. Valley 000 313 0 = 7 11 2
Headley and O’Neal. Savannah Mart, Kylee Thompson (4) and Jocelyn Carpenter. W-Headley (K-2, BB-1, ER-5). L-Mart (IP-3.0, H-5, R-6, ER-3, K-1, BB-2). Thompson (IP-4.0, H-5, R-4, ER-4, K-1, BB-2). Hitting-CHS: Headley 3-4, J. Theiser 2-4 2B, Peck 1-4, A. Theiser 1-4, Nelson 1-4, Frame 1-2 HR, O’Neal 1-4 2B; SV: Kylee Thompson 2-4, Kelsie Gothard 2-4, Lauren Wells 2-3, Kylee Jenkins 2-3, Savannah Mart 1-4, Emily Estep 1-3 HR 3-RBI, Kaitlyn Stevenson.
Second Game
Smithville 000 11 = 2 2 5
Sym. Valley 114 33 = 12 12 2
Hannah Baker and Dora Smith. Lauren Wells and Jocelyn Carpenter. W-Wells (ER-0, K-5, BB-1). L-Baker (ER-6, K-5, BB-1). Hitting-SHS: Hannah Baker 2-2 2B; SV: Kelsie Gothard 4-4 4-RBI 2B 3B, Emily Estep 2-3, Desiree Simpson 2-4, Kylee Thompson 1-3, Lauren Wells 1-3 2B, Jocelyn Carpenter 1-3, Lilly Schneider 1-1.