COVID-19 case average in Ohio at highest in a month 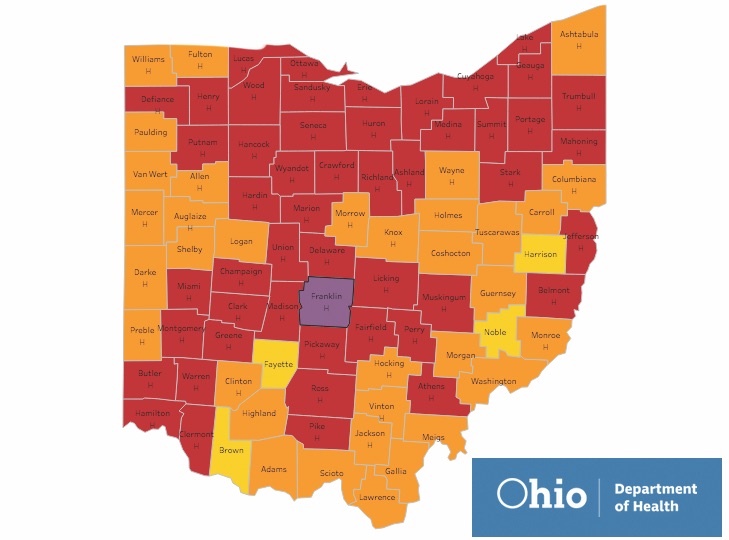 COLUMBUS — Gov. Mike DeWine said the statewide average for COVID-19 cases rose this week, marking a continued resurgence of the virus in the last month.

At his Thursday news conference on the pandemic, DeWine said Ohio is now averaging 200 cases per 100,000 people.

“Just four weeks ago, that number was 144,” the governor said.

The rise in the average comes after cases had previously been declining continuously from 900 per 100,000 people on New Year’s Day.

DeWine has said health orders, such as mask mandates would be lifted when the statewide average dropped to 50 cases per 100,000 people.

The legislature recently overrode the governor’s veto of a bill that would give lawmakers the ability to cancel health orders. This law, which was introduced by state Sen. Terry Johnson, whose district covers part of Lawrence County, takes effect in July.

The Thursday update also saw worsening conditions on the state’s COVID-19 alert map, with Franklin County, which contains Columbus, moved back to Purple Alert Four, the most severe designation on the four-tier system developed by the Ohio Department of Health. It is the only county currently at that level.

Locally, there were no changes to alert levels on the map, with Lawrence County, along with neighboring Scioto, Gallia and Jackson counties, all listed at Orange Level Two.

Lawrence County was moved back to Level Two three weeks ago, following several months at Red Level Three, its second stint at that designation.

Jackson County was also marked with an “H” for high incidence of the virus in the latest update, while Lawrence, Scioto and Gallia counties did not have this designation.

Lawrence County has an average of 90.8 cases per 100,000 people, the 16th lowest of the state’s 88 counties, and the same rate as last week, when numbers had indicated a slight rise.

DeWine also said hospitalization numbers for COVID-19 are up statewide, with more than 1,3000 COVID-positive patients in the state’s hospitals.

“That’s a level we haven’t seen in more than a month,” he said.