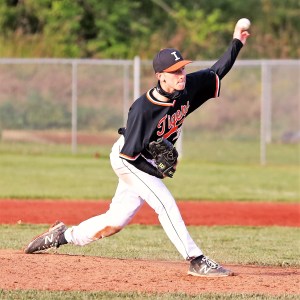 The Ironton Fighting Tigers needed a big win, so they needed a big pitching performance from Trevor Kleinman.
They got both.
Kleinman pitched 2-hit ball for six innings as Ironton got past the Fairland Dragons 4-1 on Wednesday in a key Ohio Valley Conference game.
Kleinman struck out 10, walked just one and gave up one earned run to get the win as Ironton (13-3, 7-1) took over sole possession of first place.
Jacob Sloan pitched a scoreless seventh inning for the save.
‘What you saw from Trevor Kleinman today is the hard work he puts in during the off-season,” said Ironton coach Travis Wylie. “He was very poised and in control. It was great to see him carry our team today in another big conference game.”
Fairland’s Tyler Sammons threw a complete game in taking the loss. Sammons gave up just five hits, struck out eight and walked two over six innings.
The game was scoreless until the third inning when Ironton scored a run with two outs.
Nate Bias doubled to lead off the inning and two outs later Jon Wylie doubled to score courtesy runner Ben Taylor.
The Fighting Tigers (13-3, 6-1) opened up a 4-0 lead with three runs in the fifth.
Kleinman walked and stole second to start the inning. Ashton Duncan put down a sacrifice bunt that was misplayed for an error and left runners at first and third. Duncan stole second and Kyle Howell singled home Kleinman with Duncan going to third.
Howell stole second and Cameron Deere came through with a clutch single to drive in both runners.
“We have all kinds of guys hustling and making the most of their opportunities. Then our senior Cam Deere had a huge two RBI in the fifth. That dude goes all out all the time,” said Wylie.
Fairland got its run in the sixth inning when Adam Marcum drew a one-out walk, went to second on a ground out, took third on a hit by Dacoda Chapman. When Chapman went to second on the hit, Marcum scored on the throw to second base.
The Dragons threatened in the seventh and left the bases loaded.
Cooper Cummings led off with a single, Sammons hit into a force out, Alex Rogers walked and Blake Trevathan singled to load the bases.
But Sloan — who came on in relief in the inning — got the next batter to pop out and then struck out the next batter to end the game.
Deere was 1-3 with two RBI and Wylie 1-3 with a double and an RBI for Ironton.
“That was another big win for our team,” said Wylie. “This team is starting to trust each other and playing good team ball.”
Chapman was 2-3 with an RBI for the Dragons.
On Friday, Ironton visits Coal Grove and Fairland hosts Rock Hill.
Fairland 000 001 0 = 1 4 1
Ironton 001 030 x = 4 5 1
Tyler Sammons and Cooper Cummings. Trevor Kleinman, Jacob Sloan (7) and Nate Bias. W-Kleinman (IP-6.0, H-2, R-1, ER-1, K-10, BB-1). Save-Sloan (IP-1.0, H-2, R-0, K-1, BB-1). L-Sammons (ER-1, K-8, BB-2). Hitting-FHS: Dacoda Chapman 2-3 RBI, Cooper Cummings 1-3, Blake Trevathan 1-3; Ironton: Kyle Howell 1-3 RBI, Jon Wylie 1-3 2B RBI, Cameron Deere 1-3 2-RBI, Jacob Sloan 1-3, Nate Bias 1-3 2B. LOB-Fairland 5, Ironton 4.