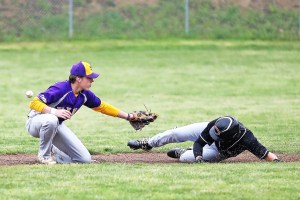 Coal Grove Hornets’ Landon Johnson (right) slides safely into second base as the ball gets away from St. Joseph Flyers’ shortstop Blake Stuntebeck. The Hornets won 6-4. (Photo By Tim Gearhart)

The game of baseball is about pitching, offense and defense.
St. Joseph was guilty of eight errors and the Coal Grove Hornets took advantage of their opportunities as they beat the Flyers 6-4 in five innings on Saturday.
Landon Davis went the distance for his first varsity win. He struck out only two but did not give up a walk and the Hornets made just two errors to the Flyers’ eight.
“He was throwing strikes and they were putting the ball in play and we made the plays behind him,” said Hornets’ coach Blair Demetroules.
“We were going to be as aggressive as we could on the bases. With a wet ball, we wanted make them make throw the ball.”
St. Joseph coach Greg Bryant said his team suffered a letdown from a big conference win over Portsmouth Notre Dame on Friday.
“We weren’t ready to play. Our heads weren’t in the game from the start. You can’t make that many errors and expect to win,” said Bryant.
“We had a big win (Friday), but that doesn’t mean anything today. We just didn’t play well.”
Each team got a run in the first inning.
Coal Grove scored as Xander Keaton reached second on an error, went to third on a ground out, and was part of a double steal after Josh Vanover walked.
The Flyers tied the score as Jimmy Mahlmeister singled, stole second and came home on a hit by Jackson Rowe.
The Hornets went up for good with two runs in the third thanks to three Flyer errors.
Landon Johnson singled and went to second on an outfield error. Keaton singled for a run and went to second on another outfield error. Connor Harrison singled and an error on the play scored Keaton.
Coal Grove got three runs in the fourth inning.
Schyler Shope walked, stole second, took third on a wild pitch and scored on a sacrifice fly by Landon Davis.
Johnson reached on an error and went to second on another error. Matney singled to drive in the run, moved up on an error, stole third and scored on a wild pitch.
The Flyers (10-2) rallied in the bottom of the fifth to cut the deficit to 6-4.
Rowe singled and went to second on defensive indifference and scored on a hit by Stuntebeck who also went to second on defensive indifference.
Stuntebeck took third on a ground out and scored on a hit by Michael Mahlmeister.
A double play ended the rally and the game was called due to a steady rain that had fallen throughout the game.
Matney was 2-3 with two RBI and Harrison 2-3 as the Hornets got six hits.
The Flyers had nine hits with Rowe going 3-3 with an RBI and Jimmy Mahlmeister was 2-3 with an RBI.
Coal Grove 102 30 = 6 6 2
St. Joseph 110 02 = 4 9 8
Landon Davis and Jake Stevens. Blake Stuntebeck, Matt Sheridan (3), Jimmy Mahlmeister (5) and Michael Mahlmeister. W-Davis (ER-4, K-2, BB-0, HBP-1). L-Stuntebeck (IP-2.0, H-4, R-3, ER-2, K-3, BB-1). Sheridan (IP-2.0, H-2, R-3, ER-1, K-5, BB-1). Mahlmeister (IP-1.0, K-1). Hitting-CG: Xander Keaton 1-3, Tait Matney 2-3 2-RBI, Connor Harrison 2-3, Landon Johnson 1-2, Landon Davis RBI; SJ: Jimmy Mahlmeister 2-3 RBI, Jackson Rowe 3-3 RBI, Blake Stuntebeck 1-3 RBI, Michael Mahlmeister 1-3 RBI, Elijah Rowe 1-3, Max Weber 1-2.