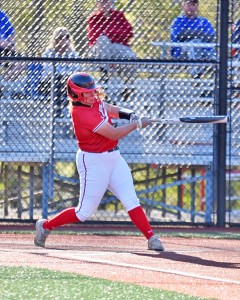 PEDRO — That ticking sound in the Rock Hill Redwomen bat bag was the sound of their offense ready to explode.
Trailed 7-3 in the bottom of the fifth inning, Rock Hill erupted for 10 runs and went on to beat the Portsmouth Lady Trojans 14-10 in an Ohio Valley Conference game on Monday.
Tori Adkins had a grand slam to highlight the run explosion while Makenzie Hanshaw went 2-3 with a double, a home run and three runs batted in.
Rock Hill had 15 hits with Kylee Howard going 24 with a double and RBI, Abby Morrison 2-3 and Karlee Gillispie had a big game as she went 4-for-4 with four RBI.
Hanshaw got the slugfest going in the first inning with a solo home run.
Portsmouth came back with three runs in the top of the second to take the lead.
Olivia Dickerson walked, Katie Born hit into a force play, Faith Phillips singled and Born scored on an error.
Ianna Carr doubled for a run and Sydney Johnson followed with an RBI double.
Rock Hill came right back in the bottom of the inning and tied the game with two runs.
With one out, Tabbi Miller and Nevaeh Hackworth singled and Emmi Stevens sacrificed the runners up a base. Gillispie then singled to drive home both runners.
The Lady Trojans went up 4-3in the third Madison Perry singled and went to third on an outfield error and scored on Dickerson’s ground out.
Portsmouth added two more runs in the fourth to lead 6-3.
With two outs, Emily Cheatham singled and scored when Olivia Ramey was safe on a missed fly ball. Perry followed with an RBI triple.
The fifth inning started with Born reaching on an error and she scored following singles by Phillips and Carr.
But then came the Rock Hill half of the inning.
Gillispie singled, Matney was hit by a pitch and Hanshaw walked to load the bases. Adkins then belted a 1-1 pitch over the fence in left field and the game was tied at 7-7.
Morrison followed with a base hit, Miller reached on an error with Morrison going to third. Hackworth put down a suicide squeeze bunt to score Morrison with Miller going to second. Stevens got a bunt single to score Miller. Stevens went to second on an error and Gillispie singled her home.
Howard and Hanshaw belted back-to-back RBI doubles to cap the 10-run uprising.
Ramey and Perry doubled in the sixth as Portsmouth made it 13-8, but the Redwomen got the run back in the bottom of the inning when Morrison singled, Miller was hit by a pitch and Gillispie had an RBI single.
The Lady Trojans tried to rally in the seventh but could only manage two runs.
Phillips, Carr and Kendall Kearns all singled for a run, Cheatham reached on an error and Ramey hit a sacrifice fly.
Portsmouth 031 211 2 = 10 15 2
Rock Hill 120 0(10)1 x = 14 15 7
Faith Phillips, Olivia Dickerson (5) and Katie Born. Kylee Howard and Makenzie Hanshaw. W-Howard (ER-4, K-4, BB-2). L-Phillips (IP-4.1, H-11, R-12, ER-9, K-1, BB-2, HBP-1). Dickerson (IP-1.2, H-4, R-2, ER-2, HBP-1). Hitting-PHS: Emily Cheatham 1-5, Olivia Ramey 1-5 2B RBI, Madison Perry 3-5 2B 2-RBI, Olivia Dickerson 1-3 RBI, Faith Phillips 4-4, Ianna Carr 3-4 2B 2-RBI, Sydney Johnson 2B RBI, Kendall Kearns 1-4 RBI; RH: Aleigha Matney 1-3, Kylee Howard 2-4 2B RBI, Makenzie Hanshaw 2-3 2B HR 3-RBI, Tori Adkins 1-4 HR (GS) 4-RBI, Abby Morrison 2-3, Tabbi Miller 1-3, Nevaeh Hackworth 1-2, Emmi Stevens 1-3 RBI, Karlee Gillispie 4-4 4-RBI.