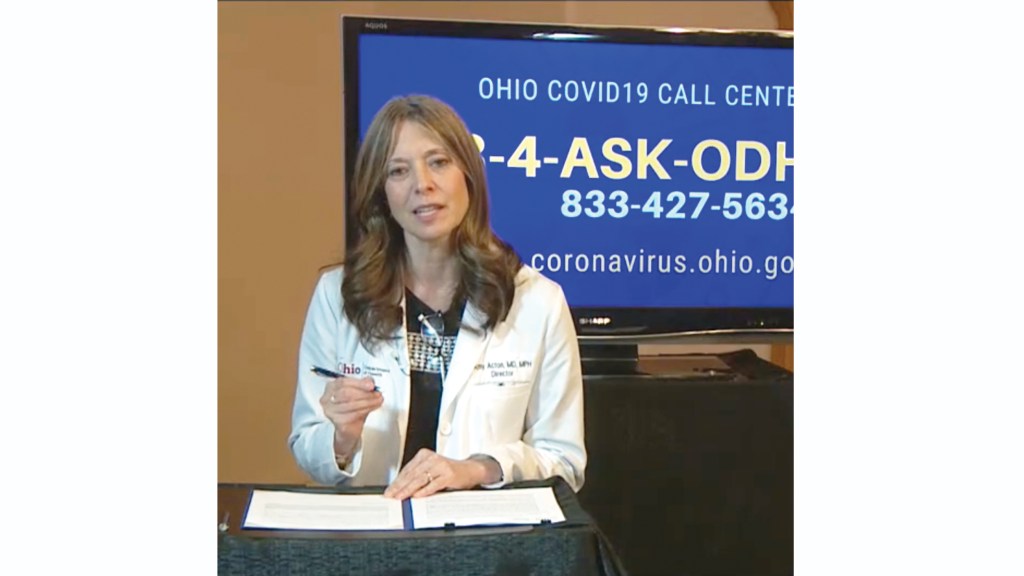 Dr. Amy Acton, then director of the Ohio Department of Health, signs health orders related to the COVID-19 pandemic in this April 2020 photo. Acton is among seven people selected by the John F. Kennedy Library Foundation to receive a Profile in Courage Award. (The Ohio Channel | Screengrab)

BOSTON — The John F. Kennedy Library Foundation has announced that it will honor the former director of the Ohio Department of Health for her work during the COVID-19 pandemic.

Dr. Amy Acton will be among seven recipients of a Profile in Courage Award on May 26.

Acton earned national praise for her early actions during the pandemic, advocating for a stay-at-home order to slow the spread of the virus until hospitals and medical personnel could be better equipped for outbreaks. She declared a state of emergency in Ohio on March 9, 2020, making Ohio one of the earliest states to address the virus.

While she held high approval ratings in the state for her handling of the pandemic, she became a focus of some Republican legislators and anti-lockdown protesters.

A group of protesters showed up outside her home in the Columbus suburbs in May 2020, while conservative lawmakers sought to strip her office of its power.

After leading the state’s department of health for the first three months of the pandemic, Acton resigned in June 2020, but stayed on as an advisor to Gov. Mike DeWine for several months.

In an interview with The New Yorker last year, Acton said, as pressure on DeWine from rightwing lawmakers increased, she was concerned she might be required to sign health orders that violated her Hippocratic oath as a physician.

“Before COVID-19 had claimed the lives of more than a handful of Americans, Dr. Amy Acton, the first woman physician appointed to Ohio’s top public health position, boldly proposed an aggressive shelter-in-place order to slow the spread of COVID-19,” the JFK Library Foundation posted on its website announcing the award. “While her leadership put Ohio ahead of most other states in responding to the virus, she became the target of protestors and legislators who sought to limit her power while engaging in personal attacks against her.”

“Dr. Acton embodies strength, truth, humility, and heart,” Pearsol said. “Dr. Acton was a speaker of truth – even when that truth seemed unlikely, was ugly, needed to be spoken to power, or was professionally risky. People are drawn to her sincerity, compassion, and extraordinary ability to relate to others.”

The other six recipients were chosen because they risked their own health and safety to help and protect others during the pandemic, the foundation said.

Among those is Michigan Gov. Gretchen Whitmer, who faced harsh backlash for her measures to control the coronavirus in her home state, including armed protests at the state capitol and an alleged plot to kidnap and kill her. Thirteen people, who authorities say were motivated in part by resentment over pandemic restrictions, have been charged in connection to the plot.

“Today’s honorees put their own lives at risk to keep others safe. They inspire us all with their courage and give new meaning to President Kennedy’s legacy of public service,” said Caroline Kennedy, the president’s daughter and honorary president of the foundation.

The award is named after Kennedy’s 1957 Pulitzer Prize-winning book, “Profiles in Courage,” about eight U.S. senators who risked their careers by taking principled stands for unpopular positions.

The other recipients are:

• Burnell Cotlon, the owner of Burnell’s Market in New Orleans, who allowed dozens of customers who lost their jobs at the outset of the pandemic to take groceries on credit, putting his own livelihood at risk.

• Fred Freeman, a Hanover, Massachusetts, fire captain and registered nurse who helped establish a program to deliver COVID-19 testing and other critical health services to residents who could not leave their homes.

• Antonio Greene, an Amazon delivery driver in Charleston, South Carolina, who while risking his health to make deliveries noticed a sign on the door of a customer’s home which alerted visitors that he was undergoing chemotherapy and was immunocompromised. Greene brought the man flowers and a message of support.

• Lauren Leander, an Arizona ICU nurse who cares for COVID-19 patients, who stood with three colleagues in support of stay-at-home orders in front of hundreds of protestors, some of whom intentionally coughed on her and her fellow nurses.

• Darrell R. Marks, an academic adviser in Arizona who advocates for the rights of the Navajo and Hopi tribal communities at Flagstaff High School, who coordinated deliveries of food and supplies to Navajo and Hopi families struggling during the pandemic and advocated for voting rights in the face of efforts to disenfranchise Native Americans.
— The Associated Press contributed to this story.