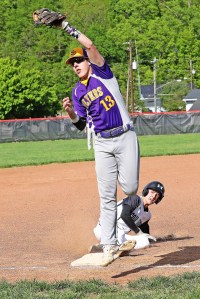 COAL GROVE — Who says you need a lot of hits to score runs?
The St. Joseph Flyers beat the Coal Grove Hornets 4-1 on Monday in a game that saw each team get only two hits.
Jackson Rowe started and got some needed work in for turning the mound work over to Blake Stuntebeck who finished up for the win.
Stuntebeck gave up one hit, struck out six and walked one. Rowe allowed one hit, one earned run, stuck out two and walked one.
Coal Grove senior Tait Matney threw very well as he gave up two hits in the complete game effort. He struck out 10, walked three and only two runs were earned.
The Hornets were guilty of five errors.
“That’s the best Stuntebeck has thrown all season. He had some pop on the ball,” said Flyers’ coach Greg Bryant.
“All the pitchers did a nice job. There weren’t a lot of hits, but we were able to manufacture a few more runs than they did.”
Coal Grove drew first blood with a run in the second inning.
Schyler Shope was hit by a pitch leading off, Landon Johnson singed to put runners on the corner. Johnson was caught stealing but the play allowed Shope to score.
The Flyers (13-5) came back to take the lead with three runs in the fourth.
Jackson Rowe walked and went to third on a hit by Stuntebeck. Michael Mahlmeister grounded out as Rowe scored,
J.C. Damron’s hard ground ball was booted for an error and Stuntebeck scored on a wild pitch. Damron stole third base and scored on an error.
The Flyers got an insurance run in the seventh.
Matt Sheridan drew a two-out walk, stole second and scored when Jimmy Mahlmeister was safe on an error.
St. Joseph plays Rose Hill as Ashland, Ky., Central Park on Tuesday.
St. Joseph 000 300 1 = 4 2 1
Coal Grove 010 000 0 = 1 2 5
Jackson Rowe, Blake Stuntebeck (3) and Michael Mahlmeister. Tait Matney and Devin Bloomfield. W-Stuntebeck (IP-5.0, H-1, R-0, K-6, BB-1). Rowe (IP-2.0, H-1, R-1, ER-1, K-2, BB-1, HBP-2). L-Matney (ER-2, K-10, BB-3). Hitting-SJ: Jimmy Mahlmeister 1-4, Blake Stuntebeck 103, Michael Mahlmeister RBI; CG: Josh Vanover 1-3, Landon Johnson 1-2.