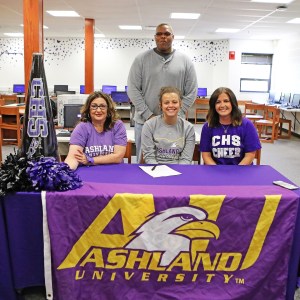 CHESAPEAKE — “There’s nothing like winning
It’s really a treat
But signing with Ashland
Is oh so sweet!”
OK, maybe that’s not exactly how the cheer goes, but after spending most of her life as a cheerleader, Faith Fletcher let out her biggest and loudest cheer after signing a letter-of-intent to continue her career withthe Ashland University Eagles.
Cheerleading comes second nature to the Chesapeake Panthers senior who comes from an athletic family.
Faith’s father was a standout defensive lineman for Marshall and was inducted into the school’s athletic Hall of Fame in 1987.
Her brother Cecil played football and ran track for the Panthers and signed with Ohio Wesleyan for track three years ago.
Faith has been involved in athletics as well. She played volleyball the past six years for the middle school and high school.
“Obviously, I felt like I was expected to go for a sport or continue my sports outside of high school,” said Fletcher.
“I really liked volleyball. I hope I can play (at Ashland). They have a beach volleyball team that’s more recreational than a set team. So, I’m hoping to play with them.”
Fletcher said she began cheering at the age of five and starting in competitive cheer the following year.
“On top of doing school cheer, I’m doing (Ashland’s) stunt program where two stunt teams go against each other and performing the same routine of stunting and tumbling against each other,” said Fletcher.
Fletcher was with Tumble World but has since focused strictly on her small group on Ashland.
“They contacted me through Instagram. My high school cheer coach (Bre Pemberton) has an Instagram team for Chesapeake cheer and they saw me on there and reached out to me on my personal account,” said Fletcher. “It was pretty cool.”
While cheerleaders perform at football and basketball games, Fletcher said the college life of a cheerleader is very time consuming.
“It’s a lot stricter at the college level and it’s a lot more practice. We have practice every day from 5:30 to 7:30 after classes. On games days, we have to be there two hours early and stay an hour after and depending on how the game goes, we might have a workout after it,” she said.
“It’s a lot of commitment.”
Fletcher enjoys cheering but she doesn’t plan to make it a career.
“I’ve thought about coaching, but I think I’d continue to play or anything. Maybe coach little kids, but past that, not really,” Fletcher said.
Instead of a cheerleading career, Fletcher plans to major in phycology.