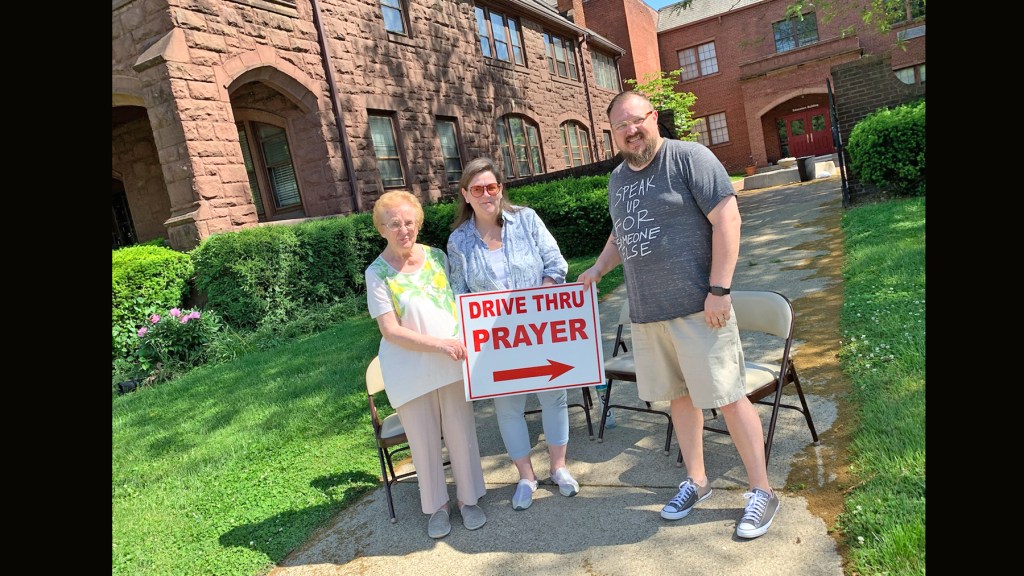 Mary Ann Wallace, Karen Rucker and Sean Daniels, of First United Methodist Church in Ashland, have been hosting drive-thru prayer once a month for the past several years. (The Ironton Tribune | Heath Harrison)

ASHLAND, Ky. — Those driving up Carter Avenue in Ashland on Thursday received a warm greeting from three people sitting on the lawn at First United Methodist Church.

Waving to those driving by, three members of the church were hosting a drive-thru prayer service, which they do once a month, Sean Daniels, a member of the congregation, said.

Karen Rucker said they had several people stop by, with whom they prayed, some on foot, some in cars. She said they had also received a lot of supportive honks from drivers.

The group said they felt like it could help a lot of people who may not be as willing to come into the walls of the church to pray.

Mary Ann Wallace said that nearby King’s Daughters Hospital has led to many stopping by for support in a trying time.

“Some people have just left someone they love there,” she said, adding that they have also heard from others who are dealing with employment situations and have been visiting the Kentucky Unemployment and Training office across the street.

Daniels said this is not something that the church started for the COVID-19 pandemic and, in fact, they have been hosting it for about five or six years, usually on Thursdays.

First United Methodist is located at 1811 Carter Avenue and the group said that everyone is welcome to come by and worship.