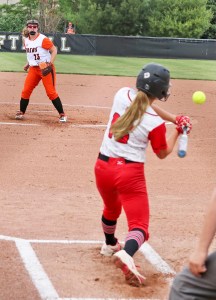 Ironton Lady Fighting Tigers’ pitcher Keegan Moore strikes out Westfall’s Abbie Bickenheuser who was the second batter in the first inning. The strikeout gave Moore 500 for her career. (Photo By Tim Gearhart) 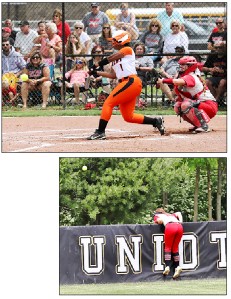 ABOVE: Ironton Lady Fighting Tigers’ outfielder Kiandra Martin connects for a two-run home run in the fourth inning that proved to be the only scoring in a 2-0 win over the Westfall Lady Mustangs in the Division 3 regional tournament semifinals on Thursday at Unioto High School in Chillicothe. RIGHT: Westfall centerfielder Leah Ragland tries to leap up on the fence to catch Martin’s home run but the ball sailed well over not only her head but the fence, too. The Lady Fighting Tigers will play at noon Saturday in the regional championship game against Wheelersburg for a chance to play in the state tournament for the first time in the program’s history. (Photo By Tim Gearhart)

CHILLICOTHE — The letter “K” is used in baseball and softball to abbreviate strikeout.
The Ironton Lady Fighting Tigers use “K” quite often when Keegan Moore pitches. But they also have another “K” in the lineup.
Moore had a dominating performance as she racked up 17 Ks and her teammate with the name beginning with “K” provided all the offense in the game as Ironton blanked the Westfall Lady Mustangs 2-0 in the Division 3 regional semifinals on Thursday.
Kiandra Martin — the lone senior in the lineup — spanked a long two-run home run in the fourth inning and Moore made it stand up as Ironton advanced to the regional championship game at noon on Saturday against Wheelersburg who beat Tuscarawas Valley 13-6 in the second game on Thursday.
The state tournament will be Friday and Saturday, June 4-5, at Akron’s Firestone Stadium.
Moore not only registered 17 whiffs, but when she struck out the leadoff batter and the second hitter of the game she reached the milestone of 500 career strikeouts. She achieved the lofty total in just two seasons after all teams missed last season due to the COVID-19 shutdown.
Moore allowed just three hits and did not issue a walk in pitching her masterpiece. She threw 110 pitches with 77 strikes.
Westfall’s Olivia Dumm threw an outstanding game as well. She struck out nine, walked two, gave up three hits and both runs were earned. She threw 79 pitches with 51 for strikes.
Ironton (27-4) scored its runs in the fourth inning with two outs. Bella Sorbilli walked on a 3-1 pitch and then Martin drilled an 0-1 pitch well over the fence in centerfield.
The first four batters for Westfall (24-6) struck out before Kylee Henry got an infield hit to third base, stole second and went to third on a passed ball.
But Moore struck out the next two batters to end the inning.
Moore retired the next 17 batters until Delana Landefeld had a two-out double. Again, Moore struck out the next batter to end the threat.
Moore retired the first two batters in the seventh when Henry got an infield hit to shortstop. The junior right-hander ignored the hit and struck out the next batter to end the game.
Besides Martin, Jada Rogers and Sorbilli were 1-for-2.
Henry was 2-3 and Landefeld 1-3 for Westfall.
Westfall 000 000 0 = 0 3 0
Ironton 000 200 x = 2 3 0
Olivia Dumm and Maddie Mullins. Keegan Moore and Graycie Brammer. W-Moore (IP-7.0, H-3, R-0, K-17, BB-0). L-Dumm (IP-6.0, H-3, R-2, ER-2, K-9, BB-2). Hitting-WF: Delana Landefeld 1-3, Kylee Henry 2-3; Ironton: Bella Sorbilli 1-2, Kiandra Martin 1-2 HR 2-RBI, Jada Rogers 1-2. LOB-Westfall 3, Ironton 3. SB-WF: Kylee Henry.