Honoring the ultimate sacrifice (WITH GALLERY) 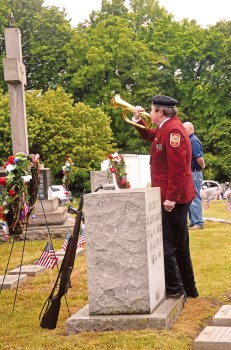 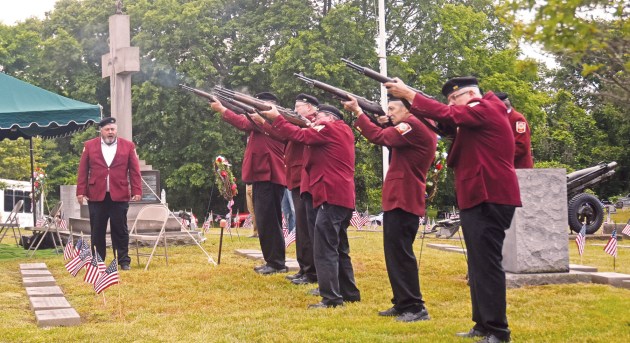 The Honor Guard of Ironton VFW Post 8850 fires a volley during the 21-gun salute. (The Ironton Tribune | Mark Shaffer) 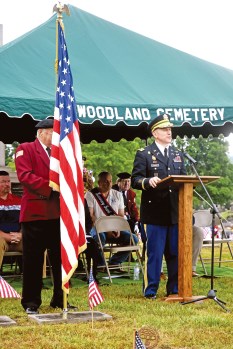 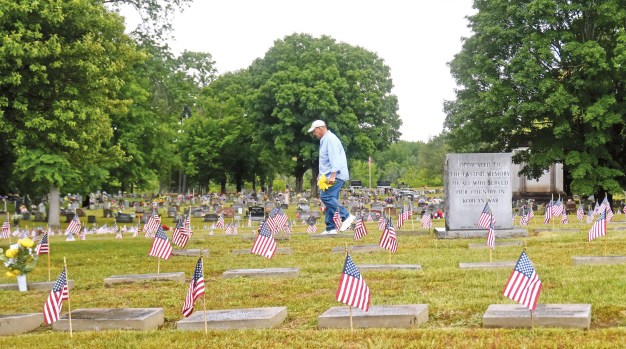 A man with flowers walks past a marker dedicated to those who served in the Korean War in the Soldiers Plot in Woodland Cemetery on Sunday during the annual Veterans Memorial Service. (The Ironton Tribune | Mark Shaffer) 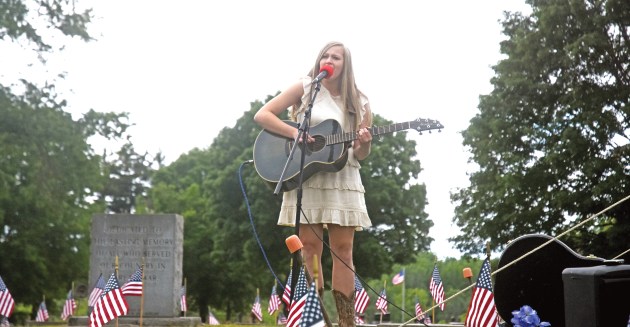 On Sunday, people gathered at Woodland Cemetery to honor the Lawrence Countians buried in Soldiers Field.

The Veterans Memorial Service at Soldiers Plot in Woodland Cemetery in Ironton is held every Sunday before the annual Ironton-Lawrence County Memorial Day Parade by members of the parade committee.

The master of ceremonies was attorney Mark McCown, who said that, for the past 150 years, Lawrence Countians had gathered to pay homage to the those who committed themselves to the defense of America.

He pointed out that Memorial Day had its roots in a day that was set aside to decorate the graves of those who had served in the Civil War and had transformed into Memorial Day.

“And for a few days, they help us set aside our political differences in pursuit of a single goal — honoring our fallen heroes,” McCown said. “These heroes died to preserve our freedoms and it is incumbent upon us to use those freedoms responsibly.”

The Ironton native enlisted in the Ohio National Guard in 1990 and took the Army ROTC program and joined the U.S. Army in 1994. He retired in 2015 after serving at numerous posts, including being deployed to Iraq as part of Operation Iraqi Freedom and in support of Operation New Dawn.

He is currently the senior Army instructor for Lawrence County High School in Louisa, Kentucky.

Turner said he was truly humbled to speak at the event on the occasion of paying tribute to a very special group of people who will always represent the nation’s finest — the military service members who paid the ultimate sacrifice for our liberty and to keep our country free.

“I think it is important we all understand the true meaning of this day,” Turner said, pointing out that many people see Memorial Day and Veterans Day as interchangeable, when in fact, they are not. Veterans Day is to honor all those who served in the military while Memorial Day is designated “for honoring military service members who died in service to their country.”

He said he is thanked for his military service on Memorial Day and while he “and thousands of other service members appreciate that acknowledgement of gratitude and respect, this day is not about military retirees, living veterans or present-day servicemen, it is about remembering and paying tribute to the countless number of brave Americans, like the ones we honor here today, who answered the call to duty in order to preserve our freedom and right to live in a free and democratic society.”

He said they had a choice to live a life of service and in doing so, ignored their personal lives and redirected their priorities for America’s safety to the benefit of all Americans.

Turner said that tradition continues today with thousands of service members in all branches of the military operating around the world “at the tip of the spear protecting our liberties and preserving democracy.”

The Honor Guard of Ironton VFW Post 8850 served as the color guard, gave the traditional 21-gun salute and played “Taps” at the end of the service.

Brother Chad Pemberton served gave the invocation at the start of the ceremony and the closing benediction.