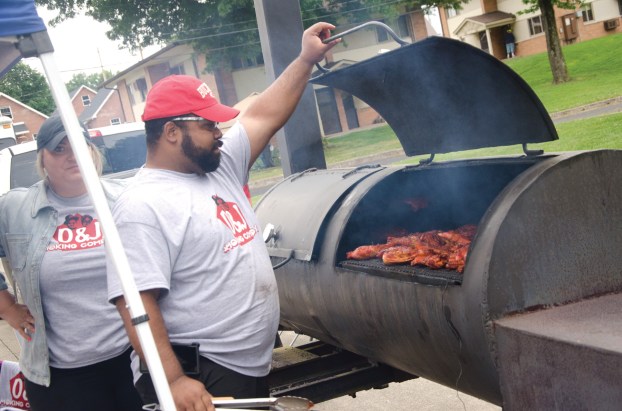 A community reunion – Block party brings people out in Ironton 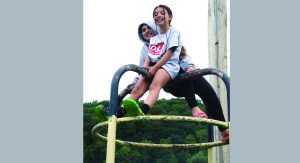 Elaina Nunley and Liana Streets play on the playground at a block party, held at Ninth and Madison streets in Ironton on Saturday. (The Ironton Tribune | Heath Harrison)

As the city geared up for Memorial Day, a block party took place on Saturday at the junction of 9th in Madison streets, allowing people to meet up after a year of COVID-19 closures.

While the day may have been cold and gray, a crowd turned out for the day-long event and children played on inflatables and on the playground, while cornhole and basketball games took place and multiple barbecue vendors sat up on the street.

“It’s a way to get the community out and back together,” he said.

Givens said there is typically a basketball tournament held there over Memorial Day weekend, but organizing for that had been called off, due to the pandemic.

Givens, who works as a DJ and provided music for the event, said it also served as a chance for hometown and regional vendors to do business.

He said he wanted to give a special thanks to New Jerusalem Church for their help with the event, as well as the vendors, who included Fat Boy Q, Roxy’s Quality Cooking, O&J Smoking Company of Chesapeake, B.U. Studios, Acquired Taste Shoes and Lace, and S&S Laundry Service of Summit, Kentucky.