Sometimes the best things you find happen when you’re not even looking.
That was the case for Jacob Wells who was content as an assistant for the Coal Grove Hornets.
Wells was unaware of the opening at St. Joseph after Chris Barnes resigned to accept a similar position at Ironton, but through some contacts his interest perked when he was told of the job. 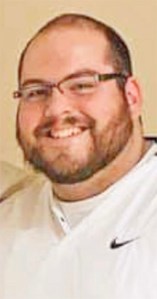 “I had some alumni reach out. I’ve known Greg Bryant for a while and they put me in contact with him and it kind of went from there. After sitting down and talking with him and Father (David) Huffman, I feel like it’s a golden opportunity and a great situation I’m excited and very thankful for,” said Wells.
Wells three years as head coach of the small private school Rose Hill Christian. His teams won 11 games and won 20 games in two years which was more than the program had won in the previous 10 years combined.
He has spent the past four seasons as an assistant coach at Coal Grove under Kevin Vanderhoof.
“I was super thankful for that time. Coal Grove has been a second home for me,” said Wells. “It’s a great place with great people.”
Wells also coached AAU for several years and had teams placed nationally. He coached with his father Bryan “Cannonball” Wells and they had a GBA team that won a national championship.
St. Joseph graduated 13 seniors this year and seven were boys who were members of the basketball team including All-Ohio standout J.C. Damron.
“In a school like that, you have to stray from your laurels and play to their strengths. If your strength is five players then pressing the other team’s guts out or run a fastbreak all the time probably wouldn’t suit the best. You’ve had to adjust to what fits your team more so than a public school,” said Wells.
“Numbers overall is a battle you have to fight. Those are two issues that you have to overcome and we’re ready to fight those battles.”
St. Joseph has always been a religion and academics first curriculum but does embrace its athletics, too. However, with so few numbers St. Joseph students must participate in not only multiple sports but academic projects which limits off-season practice time.
That doesn’t faze Wells.
“I’m all for it. I want them to be involved in any role in the school they can be,” said Wells.
“I know that at St. Joe that graduating their student-athletes and students in general is their top priority second to religion obviously, so I want the parents to know that we’re not just trying to prepare them to win basketball games. That’s the short-term goal to win basketball games. We want to make out student-athletes better and prepare them for the 13th grade.
“As coaches, that’s something we lose sight of. Our jobs as coaches is preparing our kids for possibly playing a sport in college, but really, we want to be more concerned with getting them into a college and finishing their education. I feel you have that support at St. Joe and that’s great.”
Despite the graduation losses, Wells said he is optimistic about his returning players especially with one of the area’s best point guards in senior Matt Sheridan whom Wells plans to build around his talents and leadership.
“We lost seven seniors, but it’s a blessing to come in as a new coach and have an established point guard and leader. In summer ball, you can tell the other kids look to him as a leader and having his experience back will definitely benefit us,” said Wells.
Part of Wells’ plans are to establish the word “UPAID” which stands for unity, passion, attitude, integrity and discipline.
“I want my kids to not just play the game, but pay the game and reap the rewards of what you put into it,” said Wells.