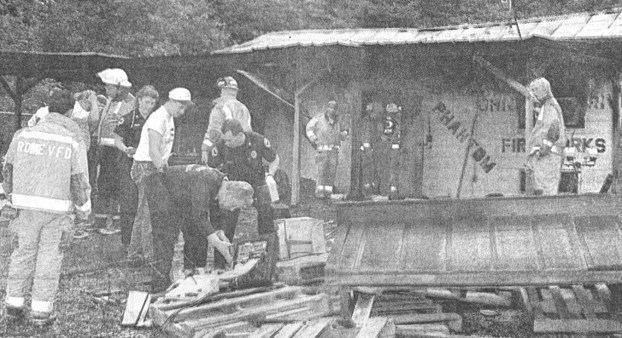 Firefighters and investigators sift through what little was left of Ohio River Fireworks in Scottown after the blaze was extinguished on July 3, 1996. Nine people were killed in the fire. (Photo by Lawrence County Sheriff’s Office Deputy Jim Cochran | For The Ironton Tribune)

Mike Boster: I guess you had to be there

A frantic voice reports an unfolding scene of destruction and chaos.

Nine miles north of the little Ohio River town of Proctorville, near a little bend in the intersection of State Route 217 and State Route 775, the Scottown fireworks store is on fire and, in the hours and days that followed, the world would realize the impact and danger of fireworks…the type that were meant only for professionals to deploy.

In the conflagration that day, the lives of dozens of Tri-State families would be changed forever. Men, women and children would die, nine of them, and many more burned and scarred physically and emotionally for the rest of their lives.

First responders, firefighters, EMS professionals and law enforcement officers rush to the site, hoping to save as many as possible. They work desperately, only to experience the sights, sounds and smells of what burning and exploding fireworks can do to a building and to the human body.

It’s a nightmare none would ever wish to relive. Hospitals are overrun with burn victims. Doctors and nurses scramble to save every life possible. Post Traumatic Stress…images no one should ever experience, images that last forever in those minds.

For a few moments that day, maybe even a few days…or for several weeks, the eyes of the nation focus on the small, unincorporated Scottown community. Across the country and around the world, viewers witness the fireworks tragedy and ask “How? Why?”

I guess you had to be there …to see the body bags, eight of them – one victim would die later in a hospital burn unit, the ninth victim.

I guess you had to be there to see responders and investigators wear tired and somber expressions, carrying out shovel-fulls of debris- brought out, sifted through and carefully preserved as evidence.

I guess you had to be there to experience the stench of burned “powder” and of burned human flesh, and the sad, hard, thankless work, days of work. trying to make sense of all of it.

I guess you had to be there. Several really wonderful people that I call friends were there. I was there later…and we are “there” again each year since.

I guess you had to be there.

Unapologetically, I repeat the same message every year to the Tri-State:

LEAVE THE FIREWORKS TO THE PROFESSIONALS.

I guess you had to be there.

Mike Boster is the director of operations for Lawrence County Emergency Management Services.

This July marks the 56th anniversary of Medicare. Did you know you can apply for Medicare online even if you... read more