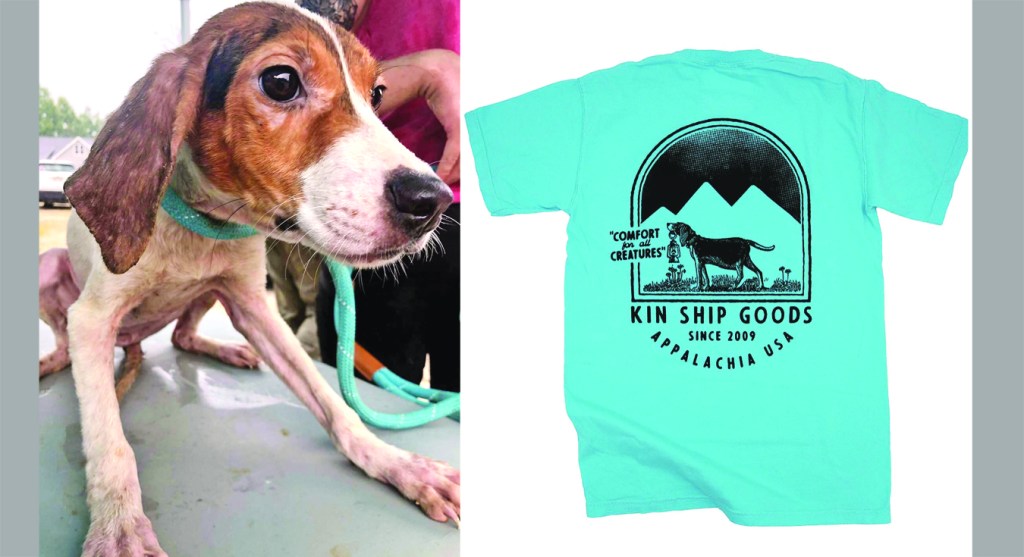 LEFT: Seventy-one beagles were rescued last month by local groups from a seller in Lawrence County. (Submitted photo) RIGHT: A limited edition T-shirt, by Kin Ship Goods, of Charleston, West Virginia, is being sold to raise funds for the care of 71 beagles who were rescued in Lawrence County last month. All profits from the shirts will go toward the dogs’ care. (Submitted photo)

CHARLESTON, W.Va. — A screenprinting company is printing special shirts to help raise funds for the beagles that were rescued from Lawrence County last month.

Kin Ship Goods, owned by Dan Davis and Hillary Harrison and located in Charleston, West Virginia, printed off 71 special T-shirts, one for each rescued dog, with 100 percent of the profits are being donated to Pitiful Paws, a non-profit private rescue group in Chesapeake, who are caring for the beagles.

The limited edition printings were a blue variant of the store’s usual “Comfort for All Creatures” shirt and proved so popular, they sold out immediately.

So the company printed 71 more of the shirts over the weekend and they are still available via the company’s website, www.kinshipgoods.com, as well as at their Charleston shop, Harrison said.

Davis and Harrison, known through their store’s social media for adopting senior beagles, said they have spoken with Pitiful Paws about the sale and the donation.

The beagles were rescued by several groups, including Pitiful Paws, Friends of Lawrence County Rescue and Midwest Beagle Rescue, Education and Welfare.

In June, Pitiful Paws found out about a dog in need of rescuing and decided to approach the dog seller while in plain clothes and did not mention they were part of a rescue group.

They bought two puppies off of the seller.

The group said that one dog was in decent shape while the other would have died if they had left it behind. The seller also threw in an older beagle for free.

The rescuers documented everything with their phones and then gave the information to the county humane agent and the Lawrence County Sheriff’s Department.

After an investigation, the sheriff’s office got a warrant and 67 beagles were rescued from the property in two hours with the rescue’s volunteers and veterinarians on hand.

The dogs require a lot of medical attention and are asking for donations, which can be made through PayPal, PayPal.me/pitifulpawsrescue, by mail to P.O. Box 690 Ona, WV 25545 or by calling Guyan Animal Hospital at 304-736-3456 and ask to donate towards the PPR account.

Or at PayPal.me/FOLCRescue or by mail to Friends of Lawrence County Rescue PO Box 150, South Point, Ohio 45680.