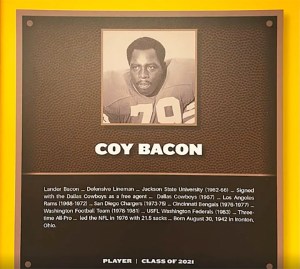 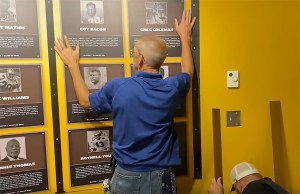 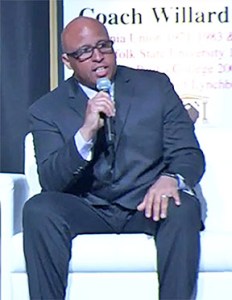 “The directors and CEOs of the Pro Football Hall of Fame know who’s going in and what’s going on, so what I’m going to do is try and write some old teammates and opponents and see if I can get any letters (of recommendation) from them.”
The Black College Hall of Fame induction ceremonies were held June 18-19 in Atlanta. The 2020 ceremonies were postponed last season due to COVID-19 and both the 2020 and 2021 classes were inducted during the weekend.
Bacon was on the nomination list for two years before being selection as a member of the 2021 Hall of Fame class.
“I knew that with him keep getting nominated he was going to get in and, sure enough, he got in,” said Anderson.
A former Jackson State teammate of Bacon’s was wide receiver Harold Jackson who was at the induction ceremonies and told Anderson, “Your dad deserves to be here. He should be here and he should have been here. I told him I appreciated that.”
Anderson enjoyed his time and event got to go on stage in place of his late father who died Dec. 22, 2008, at the age of 66 from cancer.
“I talked to his old teammates and they had some great stories of him,” said Anderson.
“They had the induction ceremonies were, I went on stage and Charles Davis asked me questions and I just answered them. It was a good time.”
In 2017, the Bengals celebrated their 50th season and selected their top 50 players. Despite only playing two seasons in Cincinnati, Bacon was listed as the No. 34 player.
Anderson said that the Bengals flew him and his family to Cincinnati for the ceremonies and he spoke with owner Mike Brown.
“He spoke highly of my dad when I met him. He talked about him and everything he did,” said Anderson. “When Charles Davis was bringing up the facts about his sacks I said, ‘Hold on, hold on. That was in a 14-game season by the way.’ I heard people laughing in the audience.”
Bacon was an outstanding football and basketball player at Ironton before going to Jackson State to play along with his close friend and Ironton teammate Danny Pride who himself went on to play linebacker for the Chicago Bears.
After his college career that covered 1964-67, Bacon played minor league football for the Charleston (W.Va.) Rockets when he was discovered by a Dallas Cowboys’ scout who signed him to the team’s taxi squad, or practice team.
Fate interred as Los Angeles Rams defensive tackle Roger Brown suffered a season-ending injury and the Rams traded for Bacon in 1968 for a fifth-round draft pick. He became a starter on the defensive line along with Lamar Lundy and future NFL Hall of Famers David “Deacon” Jones and Merlin Olsen.
The dominating front four were known by their nickname The Fearsome Foursome.
Bacon had 11 quarterback sacks in 1971 and was voted second team All-Pro and was voted by his teammates as the Rams’ Defensive Lineman of the Year. He earned second team All-Pro honors again in 1972.
The stop with the Rams began what would be a “Need Pass Rusher, Will Travel” for Bacon. In 1973, the San Diego Chargers were in desperate need of a pass rusher and traded for Bacon for starting quarterback John Hadl — a commodity the Rams desperately needed at the time — and running back Bob Thomas.
It was during the 1973 season that Bacon scored his only NFL touchdown as the agile, athletic and fleet-footed lineman returned an interception 80 yards for a score.
In 1976, the Chargers needed a wide receiver and the Cincinnati Bengals needed a pass rusher. The Bengals shipped future Hall of Famer Charlie Joyner to the Chargers but Bacon more than lived up to his part of the deal.
Bacon registered a then-NFL record 21.5 quarterback sacks, was voted the Bengals’ Most Valuable Player and was selected to the Pro Bowl.
His original total was 26 sacks but was downgraded by the NFL for unknown reasons. The record was later broken by New York Jets’ Mark Gastineau and then the new record was set by New York Giants’ Michael Strahan who got the mark on a controversial sack as quarterback Bret Favre went to the ground in front of Strahan allowing him to get the record as the two laughed.
It was the Washington Redskins who were in need of a pass rusher in 1978 and dealt for Bacon who set a then-franchise record with 15 sacks. He followed that with 11 the next season before finishing his career with the Washington Federals of the short-lived USFL the following season.
Bacon had more than 150 career sacks and his totals were amassed in 14-game seasons.
Besides the Black College Football Hall of Fame, Bacon was inducted to the American Football Association’s Semi-Pro Football Hall of Fame in 1986 as well as the Kentucky Sports Hall of Fame in 2013 having been born in Cadiz, Ky., but spending most of his life in Ironton.