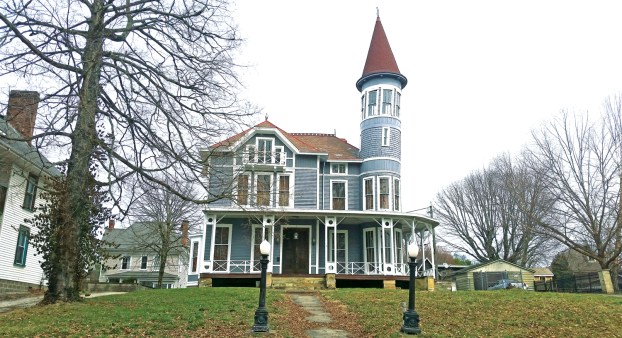 The Tower House in Ironton will be featured on HGTV’s show, “Cheap Old Houses,” in September. (The Ironton Tribune | Mark Shaffer)

Tower House will be on TV next month

Will be on final episode of ‘Cheap Old Houses’

Back in March, a crew from HGTV came to Ironton to film a segment on The Tower House on N. Fourth Street for the show, “Cheap Old Houses.”

Now, HGTV has announced that “Cheap Old Houses” will start showing on HGTV and the streaming service Discovery+ on Aug. 9 at 9 p.m.

However, The Tower House segment will not be shown until the final episode on Sept. 6 at 10:30 p.m.

According to HGTV, “Cameras will follow Ethan and Elizabeth as they visit cities and small towns across America to tour two low-priced older houses and share stories of the homes’ historical significance and architectural uniqueness.”

The tower that gives the house its name is odd in the fact that it tilts slightly away from the house, but the tower roof is still parallel to the house.

So, how did a house in Ironton end up on television. Well, it is thanks to a Heather Williams, a realtor with the Proctorville-based Bunch Real Estate Associates. She was in the process of selling The Tower House and had posted it online and then the Finkelsteins saw it.

“I guess the saw the Tower House after I posted it on Historical Houses of America,” Williams said. “They contacted me and they had chosen, I think five houses in Ohio, and this was one of them.”

According to HGTV, on each episode of “Cheap Old Houses,” the Finkelsteins will share stories of the homes’ historical significance and architectural uniqueness. Relying on Elizabeth’s background as a historic preservationist as well as the couple’s shared passion for saving old property gems — and with the help of 3D graphic renderings — the pair will imagine what the houses could look like with proper restorations. They also will visit beautifully restored homes formerly featured on their immensely popular Instagram account.

“We started Cheap Old Houses on Instagram and it ignited a movement,” said Ethan Finkelstein. “Our site features the best historic properties on the market right now and that means we have to go find the best places to post.”

“We always say no sleep until every house is saved,” said Elizabeth Finkelstein.

To start the season, Ethan and Elizabeth Finkelstein will scour online real estate listings to plan their latest road trip to upstate New York in order to check out two cheap old houses listed for just over $100,000. Traveling in Old Blue, their vintage cheap old truck, they’ll drive to Amsterdam to tour a large 1900s Victorian home with a detached carriage house and then on to Fort Plain to see a huge 1850s home with a 1950s-retro vibe. During their travels, Ethan and Elizabeth Finkelstein also will stop in Greenwich to visit a saved old schoolhouse that has been meticulously restored.

“Cheap Old Houses is a real estate rabbit hole — and we live it,” added Elizabeth. “And that’s not even the best part. We get to meet the people who restore these houses too.”