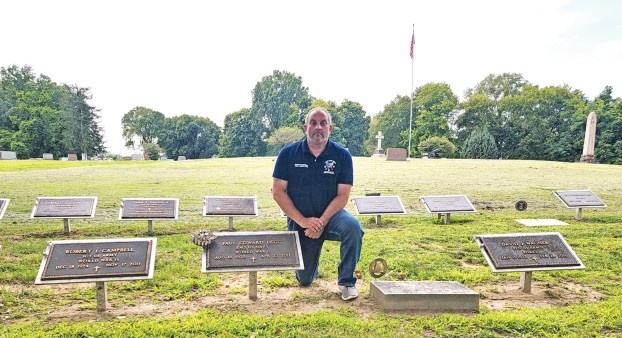 Tim Carpenter, the Lawrence County Veterans Services officer, kneels among the graves at veterans plot at the Woodland Cemetery. His office is having workers install aluminum platforms for grave markers which were sinking into the sandy soil. (The Ironton Tribune | Mark Shaffer) 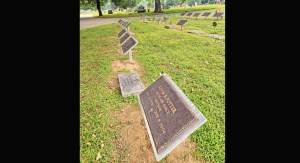 Rows of veterans are now elevated at the veterans plot at Woodland Cemetery. Around 50 have been installed and the Lawrence County Veterans Services plans to elevate all 1,000 markers over the next couple of years. (The Ironton Tribune | Mark Shaffer)

People driving past the veterans plot in Woodland Cemetery may have noticed some work going on.

Some of the markers have been elevated on new stands.

That is part of project to make the veterans plot look better.

Tim Carpenter, who became the Lawrence County Veterans Services officer after retiring from the U.S. Army after 26 years of service, began the project earlier this summer.

The plot is under the care of the county and when Carpenter took the service officer job six years ago he was dismayed to see so many of the grave markers were sinking into the ground. The veterans plot is property of the county and is in charge of care and maintenance of the markers.

“I’d say half of them were sunk so far down, you couldn’t even read the names anymore,” he said. “So, for the past five years, I have been fighting with trying to get them up and out of the ground to where at the least you can read the names so we can respect these veterans properly.”

The trouble was that even though the markers were raised up, they would start to sink again because of the sandy soil that this river valley has.

In fact, some of the markers that were adjusted before Memorial Day already are sinking again.

“It’s nobody’s fault, it is just that they sink real easily,” Carpenter said. He added it was especially bad for the markers of the Spanish American War and World War I veterans. “Those markers were almost completely sunk.”

So, Carpenter decided the best way to proceed was to get platforms for all the brass plates and the stones.

“We wanted to do this a year ago, but COVID-19 slowed us down and there was an aluminum shortage,” he said.

They designed an aluminum platform that gets the markers out of the ground and has a locking mechanism for the small markers that identify which war the veteran was in and a spot to put an American flag.

The platforms are being built by Swift Manufacturing of Ironton, which is located close to the cemetery. The aluminum platforms cost about $300 each.

Carpenter wanted to assure people that the aluminum platforms are being installed “honorably and respectfully. They are doing a good job of getting these in.”

So far, about 50 have been installed and those are the brass markers. They had to redesign the platforms for the stone markers.

“I didn’t like how the ones for the stones looked, so we backed up and we made a new mount that will be coming out shortly,” Carpenter said. “They will be at the same exact level. Once I get them all up, it is going to look really good. Originally, I wanted to change the markers all to brass markers, but that is just not financially possible. But from now on, the only markers I’m going to put up here is the brass markers.”

Carpenter said his main goal is to make the plot look better and “to show more respect for the veterans. It will look a lot better up here.”

There are about 1,000 plots that will need markers and Carpenter said it will take some time to get them all improved.

“Once we get more of them replaced and more of them up, it will look a lot better,” he said. “My vision for this cemetery is for it to be a point of pride for Lawrence County.”

Another improvement that Carpenter wants to do in the future is to put in a sidewalk from the sign marking veterans plot to the flag pole in the center of the hill. There is a pathway between the graves for such a sidewalk but Carpenter is checking to make sure there aren’t any electrical lines and to make sure that the design of the sidewalk is good for people in wheelchairs.

He would also like to put in more flag poles so all branches of the military represented.

Carpenter said neither the Veterans Service Office or the commissioners are looking for credit for the project.
“I just feel that we owe this to the veterans,” he said.